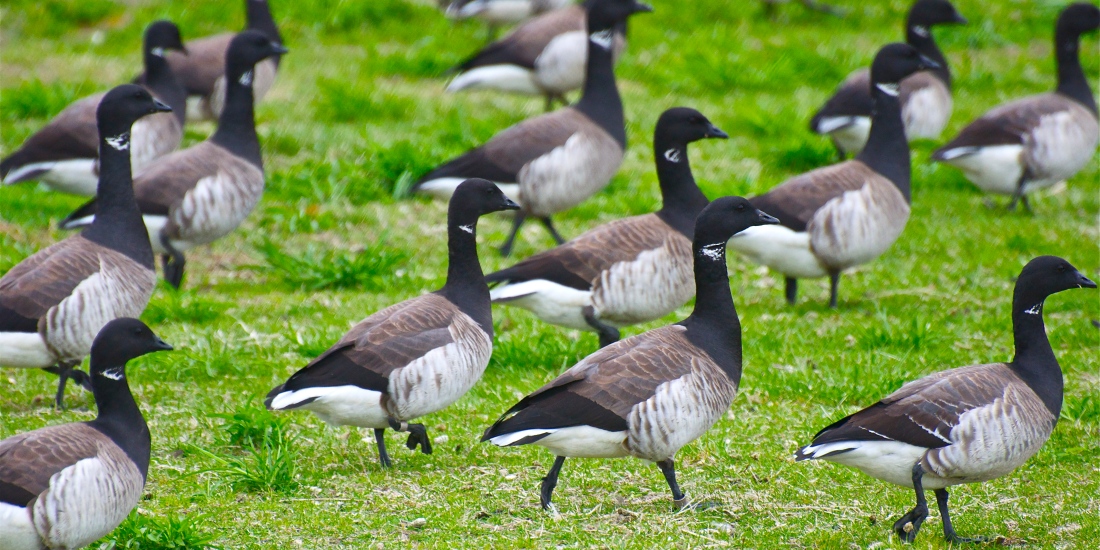 New York City needs little introduction. A throbbing metropolis and concrete jungle where, as they say, if you can make it here, you can make it anywhere, because only the tough survive. Summers are hot and humid and the winters bitterly cold. When I arrived in the city my first impression was that this was not a place where nature could be found thriving, let alone surviving. But when one looks closely, it is surprising how many species have learned to co-exist with humans in this iconic city.

Manhattan is an island bordered to the east and west by the East River and the Hudson River, respectively. These water courses provide a welcome break from the concrete sprawl, for humans and wildlife alike. As the cold northern winter closes in and the temperature drops rapidly, these rivers and their surrounds begin to play host to water birds that migrate south from the frozen lands of Canada and Alaska. One of the species that arrived in abundance was the Brant Goose.

I moved to NYC in August, just in time to enjoy the tail end of a long hot summer. October arrived and the temperatures started to drop and continued dropping to levels of cold that I had not previously experienced. With the drop in temperatures, so the birds of the north arrived. I saw my first Brant geese on the banks of the Hudson River. A single pair of geese stood feeding on eelgrass growing on an exposed rock. They were much smaller than the Canada geese that I had become accustomed to seeing, so I grabbed the binoculars and was able to identify  the first Brant that I had seen, making it an exciting moment.

For a short window of time each summer these small geese, approximately 63 cm (25 inches) long and weighing 1.5 Kg (3.5 lb.) vanish from New York as they head to the high Arctic coastal tundra of North America and Russian Siberia, where they breed in colonies. They are the most northerly breeding goose in the world.  Male and female bond for life and are both active in raising the young in order to make the most of the short Arctic summer so they can head south before the freeze arrives.

As the grip of winter tightened, more Brant started to arrive, appearing in small groups of two to four along the river. For a short period of winter the temperatures dropped to -22 degrees Celsius (-7.6 degrees Fahrenheit) causing the Hudson to freeze over. In these harsh conditions the geese vanished for a while but soon returned as the ice thawed. As the first signs of spring arrived, I took a trip to Liberty State Park where I found the Brant in huge flocks, grazing on the park grass; flocks also grazed on Brooklyn Park to the east. The geese remained on the Hudson and in the surrounding parks until deep into May before taking flight on the long journey to the Arctic Circle.

European enthusiast will know this bird as the Brent goose. The names Brent and Brant originate from the word ‘brand’ which means burnt in Norse language. This is in reference to the charcoal colouration of the bird’s head and neck. There are two distinct sub-species of Brant goose; the Atlantic and the Pacific. The Pacific bird spends the winter in California and Mexico and breeds in Russia. It is distinguished from the Atlantic bird by its black underparts.

These beautiful birds provide yet another reminder that we can experience wildlife wherever we find ourselves. I look forward to watching the geese return this year, but know that with them will come the vicious winds and blinding snow of another New York City winter.