It is 15th January 2003 and the BBC go to air with episode 7 of The Life of Mammals. The camera shot is a close up of David Attenborough. We can see that he is on a small speed boat, looking wind swept and salt sprayed, wrapped up in waterproofs, complete with red self-inflating life jacket. “I can see its tail just under my boat, here” he informs us excitedly, pointing and looking down. “its coming up, its coming up… there! A huge pale blue shape beneath the water comes into focus and the sea bursts open as Attenborough shouts “the Blue whale!” The camera pans out revealing a vast ocean and Attenborough shrinks alongside the mighty leviathan.

This slice of film remains an iconic piece of natural history television and stands in my mind alongside Attenborough’s meeting with the Wandering Albatross and the Mountain Gorilla as truly inspiring moments. I think that I was so inspired because these moments of close contact with exotic, critically endangered wildlife were far beyond what I could ever hope to experience.

Fast forward to February of 2012; I was enjoying a short holiday to Sri Lanka. The island had proved to be a haven for wildlife, from the stunning birds of the lush highlands of Ella, through to the elephants and leopards stalking the low grasslands of Yala. The last stop was going to be a relaxing weekend on the deserted palm fringed, white sands of Mirissa beach. We had read about a recently discovered Blue whale population in this area but there really wasn’t much online to suggest this was accurate or accessible. As our car pulled into the town of Mirissa I spotted some hand painted signs and a printed sign advertising whale watching, but no mention of Blue whales. We signed up for an early morning whale watching trip and were assured that there would be a chance to see Blue whales. At this stage I was mildly excited but doubted the validity of the claims. After all, how do you only just discover a population of the largest animal on the planet a mere 40 minutes off shore? 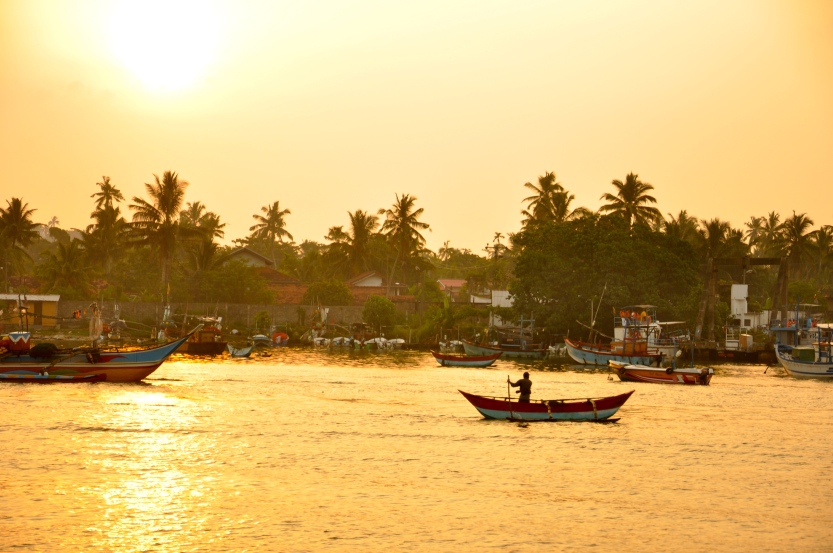 We arrived at the harbour in time to greet a saffron sunrise and boarded a small, clean whale watching boat. I was pleased to receive a safety briefing before being told of the types of wildlife we could hope to see and a little about the lives of whales. Sure enough, again the words “Blue whale” were spoken. We set out, chugging over a bumpy sea under a hazy sky. The destination was the edge of the continental shelf that is close to Sri Lanka’s southern shore. The warm waters of the idyllic coastline collide with the cold deep waters of the shelf, creating a nutrient rich soup for the tiny krill that form the diet of the massive filter feeding whales.

After around 20 minutes of chugging a call goes up. There is excitement as heads spin in all directions because nobody can hear what was said over the droning engine and thumping of waves against the nodding bow. The engine dies and the call goes up again – “dolphins!” This time I see them; a magnificent sight of slick torpedoes cutting the seas surface skin as the pod move as one, breaching together in unison.

Another pod of dolphins keep us company as we fire up the engine and push forward towards the edge of the deep shelf where the engines are cut. We sit in silence, scanning the horizon and listening intently for that burst of high pressure air and water that a whale releases as it breaks surface.

Then I see it in the distance, the cloud of fine mist, like steam from a pressure cooker, blasted up against the backdrop of deep inky blue water and the cry goes up – “whale!” A shape breaches the surface of the sea but it is distant. We chug towards the direction that the captain hopes the whale will travel. This move is a relief because I did not want to be involved in chasing the whale or getting too close. These animals need space and there can be no enjoyment gained from causing stress to a whale. The whale sinks beneath the waves and the silent wait commences again.

We do not have to wait for long. Within 10 minutes a slate grey back floats to the surface and lets out another blast of misty breath. The biologist on board announces that this is a Blue whale. I am actually stunned. Even though I am looking at the creature and photographing it there is something in me that is still in denial that I could possibly be looking at a Blue whale. After a few minutes at the surface the whale takes a breath and arches its huge back and all cameras go up for the iconic whale photo; the tail. The huge tail fin seems to lift the ocean as it swan-necks out the sea, causing a waterfall to tumble from the fin before it straightens and sinks beneath the waves. Any doubt about which whale species we were looking at vanishes when the immense tail fin lifts up like a sea-plane taking off.

The Blue whale is the biggest animal on the planet. It is in fact, as far as we know, the biggest animal that has ever lived on the planet. At over 30 meters (100 ft) long and weighing in at around 180 metric tons (200 tons) this is an immense creature. The statistics are well known and seem to be of impossible proportions; a tongue that weighs the same as an elephant, a heart the size of a compact family car and some blood vessels wide enough for a person to crawl through. It is said that this whale weighs the equivalent of a herd of 30 elephants.

Over the next couple of hours we watched many more Blue whales breach the surface each time greeted by childlike excitement from all of us on the boat. Perhaps the highlight was the last whale of the day that surfaced alongside our stationary, silent boat. We all heard the blast of acrid breath from the nostrils before we saw it. I turned to see this massive mottled gentle giant, far too big and too close to photograph properly. I fired off some shots, struggling to fit the immense whale into the frame of my 300 mm lens on a rising and falling ocean.

It wasn’t until I looked at the photographs that I noticed that the whales were not alone. Look closely and we see that they were accompanied by several Remora fish. These little warm water suckers cling on to their outsized hosts, not as parasites as we might at first suspect, but in a symbiotic relationship. The Remora causes no harm to the whale while it feeds on ticks and dead skin as it hitches a ride across the great oceans of the world.

The whale stayed alongside us for a short while before commencing the pre-dive routine that ends with a final misty blast and a deep breath, before presenting us with the huge, seeming endless arched back that scrolls down into the dark waters below. The final wave goodbye is that awe inspiring tail lift, that for the last time rolls up, cascading water before pointing skywards like the twin spires of a sunken cathedral that collapses into the deep. 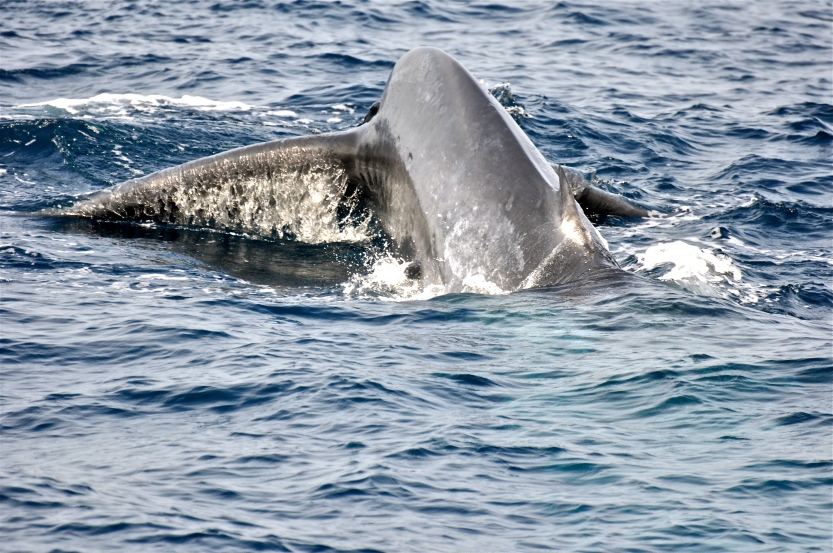 It was a trip that I didn’t want to end. Just one more Blue whale I thought to myself, but I knew that I had already been blessed to see so many. It is an enormous privilege to be in the company of the biggest creature that ever lived on earth. Hunted to the verge of extinction and yet peaceful and trusting enough to float alongside a boat containing the species that hunted them, providing us with a one of our greatest life experiences. If you have the chance, head to Sri Lanka and spend time in the company of the largest animal that lives, or ever lived on planet earth. It is a humbling experience.