On a cold January morning, I found myself boarding a flight to San Francisco for a few days of work. I had only landed back in NYC, from the UK, the day before. My head was heavy with jet lag and I was feeling exhausted. The best cure, I thought, would be a weekend stay in the paradise of the naturalist, Monterey Bay. I hired a car and joined the Friday evening procession south, arriving in Monterey late in the evening. I checked into the Hotel Abrego, grabbed a bite to eat, set my alarm for an early morning whale-watching trip and fell asleep.

I had booked the whale-watching trip in advance through Monterey Bay Whale Watching and was excited at the prospect of getting out on the water. Dawn was breaking when I arrived at the dock. I walked past closed bars and restaurants where the sounds of juke boxes had been replaced by the distant bark of the California Sea Lions that were heading out to sea for breakfast. I needed a coffee. I always need a good, strong black coffee to start the day. In a random act of kindness, the owner of the coffee shop, Water & Leaves, taking a delivery 2 hours before the shop was due to open, hands me a delicious coffee, free of charge. This would surely be a great day!

The boat cast off from the dock and chugged out towards the harbour wall. The smell of brine and kelp, whipped up in the cold wind, was energising. The boat slowly passed through the harbour mouth, where heaving heaps of noisy sea lions blew plumes of fishy steam up into the morning air. Free from the confines of the harbour, the skipper now leant on the accelerator and started to carve the bow through the waves that were rolling into the bay. I sat back and watched the low cloud rolling down the hills, engulfing the treetops in soggy cotton wool until the land became a distant shadow on the horizon. I then turned my gaze to the slate grey water, searching for signs of a nature.

The boat slowed and I spotted movement. A dark point pierces the surface of the water; then another, then another, then more and more. The on-board biologist calls out that we have been met by a pod of Long-beaked Common dolphins.

More and more dolphin backs arched out of the water as they came close to the boat. Soon we could see them torpedoing through the water to the side of the hull of the boat. I pointed the camera and fired off a few shots. I was only getting photographs of water as the dolphins moved at astonishing speed. A new tactic was required. I fired off a few more shots at where I thought the dolphins were heading and this time I captured them!

At first the dolphins powered past the boat, just beneath the sapphire surface, but soon their curiosity got the better of them as they sped past with noses and eyes peeping above the waterline, blowing bubble chains. 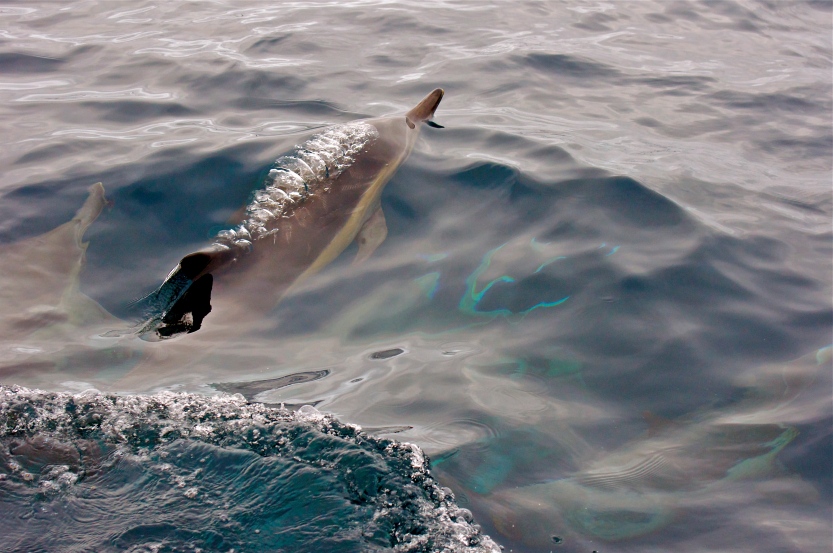 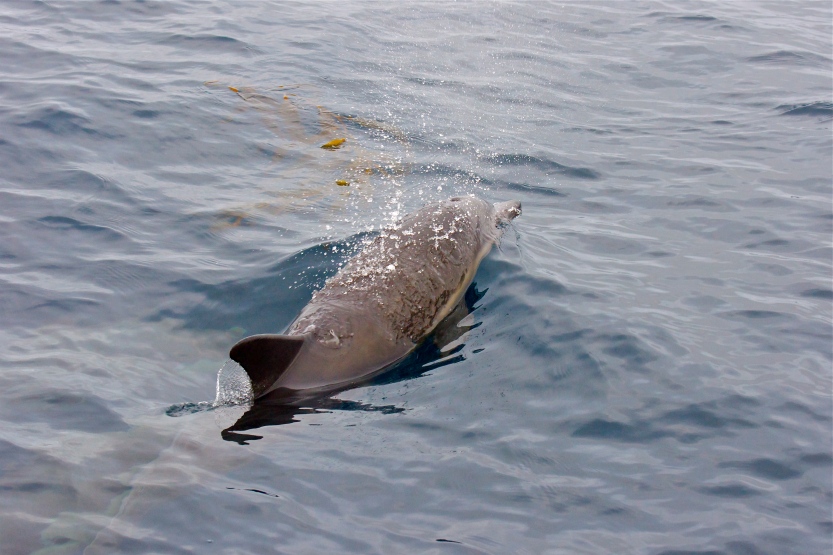 The Long-beaked Common dolphin grows to a length of up to 2.5 meters (8.5 ft.) long and can weigh as much as 235 Kg (500 lb.) and can live for around 40 years. Their primary food source is schooling fish such as sardines, anchovies and pilchards which they hunt in groups, diving to depths of almost 300 meters (900 ft.) for up to 8 minutes at a time before coming to the surface to breathe. 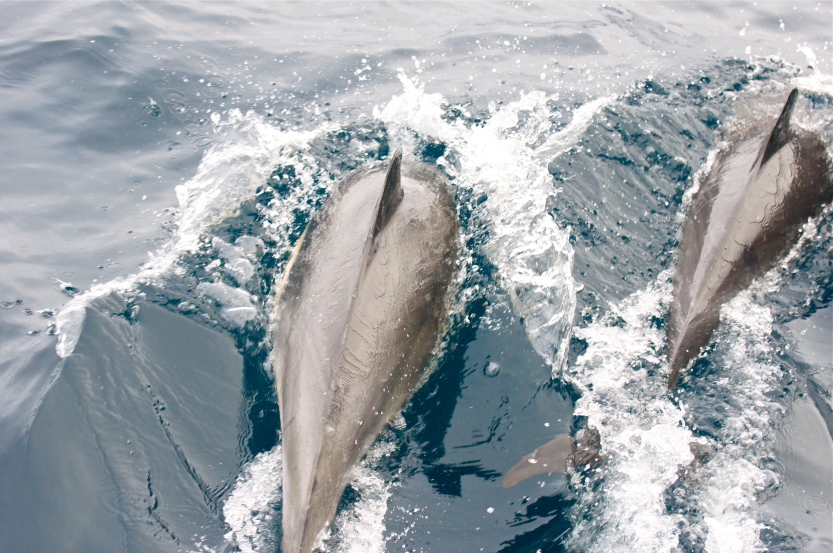 It was time to leave these beautiful creatures behind and continue our whale hunt. The skipper fired up the engines, pointed the nose towards the mouth of the bay and accelerated away from the pod. This is what the dolphins had been waiting for. Now their real fun could start! The dolphins lined up alongside the boat and waited for us to pick up speed. When they decided we were moving fast enough they dropped back into the rough water, which they sliced through before jackknifing into the larger waves created by the wake of the boat, their shimmering bodies bursting from the water, one after the other.

Displaying all of their skill and intelligence in their movements I was reminded of the words of Douglas Adams, who speculated in The Hitchhiker’s Guide to the Galaxy;

“For instance, on the planet Earth, man had always assumed that he was more intelligent than dolphins because he had achieved so much—the wheel, New York, wars and so on—whilst all the dolphins had ever done was muck about in the water having a good time. But conversely, the dolphins had always believed that they were far more intelligent than man—for precisely the same reasons.”

The Dolphin has featured heavily in myth and legend around the world since the days of the ancient Greeks, who immortalized the dolphin in the stars as the constellation, Delphinus. The Greek historian, Plutarch wrote;

“To the dolphin alone nature has given that which the best philosophers seek: friendship for no advantage.  Though it has no need of help of any man, yet it is a genial friend to all, and has helped man.”

These words were as true on the boat in Monterey Bay as they were back in the year 100 AD, our dolphins did feel like genial friends. While these delightful animals are holding a strong population, they remain susceptible to the influences of humans, such a drift and gill net fishing. Respect for the oceans and the use of sustainable fishing techniques and plastic reduction will see the dolphin immortalized where it belongs; not in the stars but in our oceans.