My first encounter with the Central American Agouti came early in the morning on the small Panamanian island of Isla Muertos. Awoken by the sunrise, from the bed I could see two small mammals scuffing up the grass in the early morning gloom. They spotted my first move for the camera, and in a blink of an eye they were gone. This same dance played out over the next couple of mornings. I left the island without an Agouti photograph.

Fast forward 10 days to Panama City. I had organised a bird spotting walk along the iconic Pipeline Road. This is one of the world’s premier birding hotspots, but there is a host of other wildlife in the area. My ears picked up scampering under the dense dark rainforest canopy. A couple of Agoutis scampered out of sight. Another failed attempt! At lunch time my bird guide and I set off for the return journey to my hotel. We passed through an immaculate community, with manicured lawns and fluorescing flowers. Here, finally, I found cooperative Agoutis!

The first Agouti was scratching around in leaf litter in a small road-side park area. We pulled the car over and I lowered the window to watch for a while. The Agouti is a rodent. In size and shape it is somewhere between a large, long-legged guinea pig and an Asian Mouse deer, with a body length of up to 61 cm (24 inches) and a weight of up to 4 Kg (8.8 lbs). The term agouti is used to describe colouration in the coat of other animals, such as dogs or horses. It describes a condition of alternating bands of black and blonde on each hair shaft. This colour effect can be seen on this on these shimmering little rodents.

I started to notice more Agoutis in the area. They were on the grass verges, scratching in bushes and timidly tip-toeing through people’s gardens. Agoutis favour a diet of fruits, but will also take vegetables, roots and nuts. They feed sitting on their haunches, squirrel style, holding their food in their front paws, or hands, or feet.

The Agouti is a romantic animal with a kink or two. Pairs mate for life and remain faithful, however, courtship is an unusual affair. The male sprays his bride with urine which, if the time is right, sends her in to a “frenzy dance”. This irresistible jive excites the male in to giving her a few more cheeky sprays. This is too much excitement, she cannot resist, and mating follows. This is how Agoutis are made! 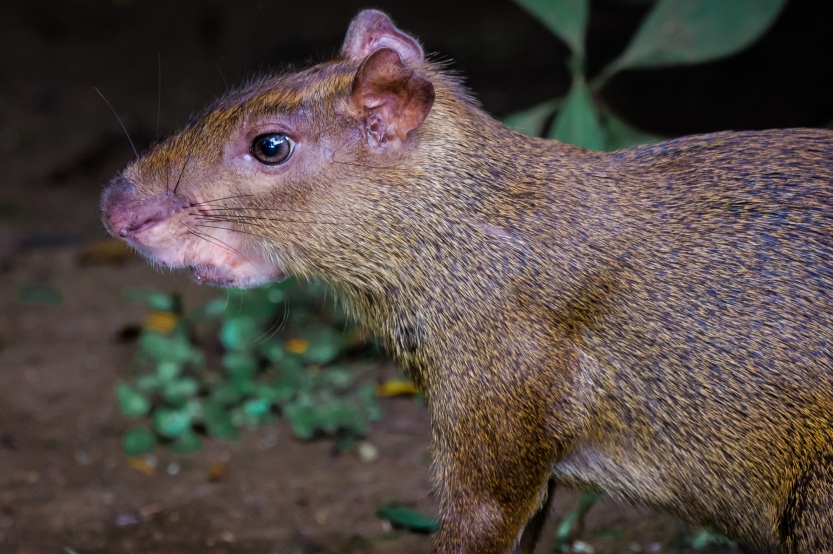 The young Agouti shown in the image below was timidly waiting below a bird feeding table, in a garden in the old Panama Canal Zone. The table was loaded with fruit which was being attacked by a jewel box of tanagers. Perhaps a flick of banana, a berry or half a grape would drop. If so, this little guy would be there waiting to mop up.

Despite being a tasty snack for large birds of prey and many carnivorous mammals, including humans, the Agouti maintains a status of Least Concern. This common rodent barely turns heads in its native gardens and forests of Panama. But, as a child, I used to keep guinea pigs, so seeing this close relative of the wild guinea pig, roaming free in people’s gardens was a truly delightful experience.