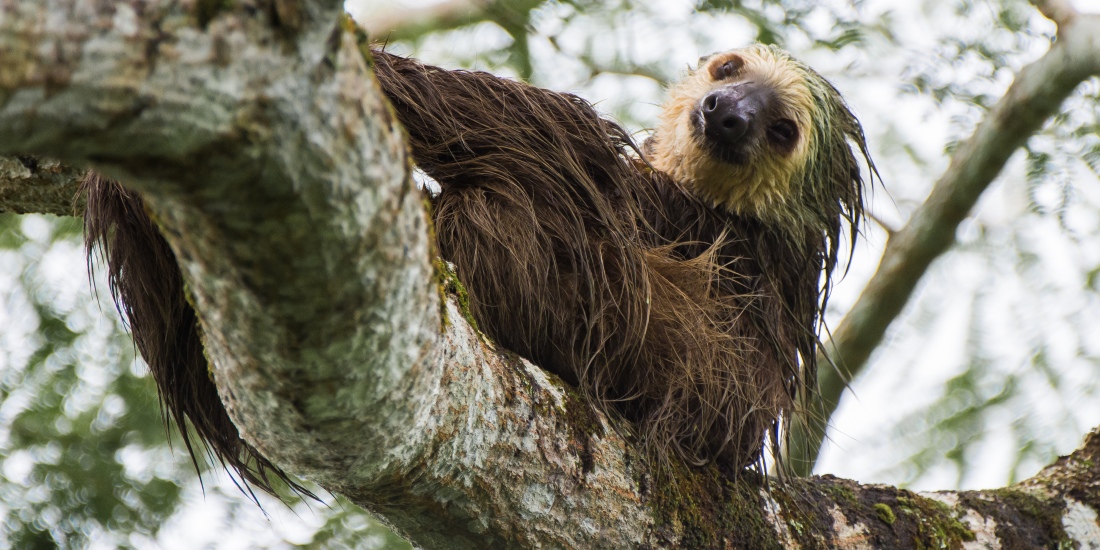 My skin wore the morning air like a warm, damp cloak, as I stood squelched into the trail mud of the Panamanian paradise island of Bastimentos. Silhouettes of Antbirds rustled through the dank undergrowth as they monitored the military march of a column of Army ants. I looked up at the wiry green bundle that hung above my head. The bundle in question was the rear end of a sleeping Three-toed sloth. I pulled a heavy shoe from the sucking mud, and the indigenous guide and I carried on walking along the Salt Creek community trail. I asked him about the chances of seeing the Two-toed Sloth that had, up to this point, evaded me. He explained that in this area the Two-toed sloth is much less comfortable around people, preferring to spend its time high in the canopy. Our chances of seeing one were slim.

We made our way deeper into the jungle when the guide stopped, holding up his right palm to me while pointing up; “parrot!” he said. My eyes worked their way along his left arm to his fingertip, drawing an imaginary line straight up into the dense canopy. This was a bucket list moment for me! High in the canopy was a Red-lored Amazon Parrot. I’d only seen these magnificent birds in zoos and pet shops. I fixed my binoculars on it and it fixed me with a tilted glance. We stayed frozen in this staring competition for a few moments, when something strange happened.

Unsure if it had been noticed, the parrot maintained its “I’m a leafy stump” pose as I lifted my 500mm zoom lens up. The canopy was dark with diamonds of light piercing the leaves. These were less than ideal conditions to memorialise a bucket list moment in pixels. As I clicked and moved to find a solid background, a dark shape shifted in the leaves behind the parrot. A long hairy arm unfurled and hauled a shaggy bulk through the branches above. It was a Two-toed Sloth! Another bucket list moment in the same photo frame. The shaggy animal was high in the canopy, obscured behind branches and foliage, and was spotted with back-light. With a little adjustment I was able to track it to a clearing and fire a few shots, as it stopped for a leafy snack.

The guide explained that the people of his village love the Three-toed sloth, but the Two-toed sloth is much less popular. They have a questionable temperament and a different diet. While the Three-toed sloth almost exclusively eats leaves, the Two-toed sloth will make frequent trips to the village banana plantation to indulge in a little forbidden fruit. In my head it occurred to me that this is probably the reason that he didn’t expect to see one, but I stepped back from that line of enquiry.

The Two-toed sloth is a bigger animal than the Three-toed, growing to around 70 cm (27 inches) and weighing in at up to 9 kg (19.8 pounds). It is also a little faster moving, by sloth standards. This sloth gets its name from the two massive finger claws that are up to 6.5 cm (2.0 to 2.6 in) long. This name is rather inaccurate, as in common with all sloths, the Two-toed sloth has three toes, but has two fingers.

It was from my base in Panama City that I started to make regular acquaintance with the Two-toed sloth. Unfortunately, the encounters were generally the same. A ball of soggy strawberry blonde, sleeping balanced on a branch, high above.

Whilst the Two-toed sloth is common in Panama and listed as Least Concern globally, I had been told that its Three-toed cousin was much more abundant and that I was less likely to see the Two-toed. Although my encounters with the Three-toed were more close-up and personal, overall, I did see more Two-toeds.

I arrived at the Gamboa resort car park to enjoy the unrivaled view of the lake and jungle. I spotted a couple of Agouti nibbling on the manicured lawn, and wandered over to take some shots, but they were gone in the blink of an eye. As I walked back across the car park a man leaned out of his car window and told me that there was a sloth in the trees at the back of the car park, and it was awake! 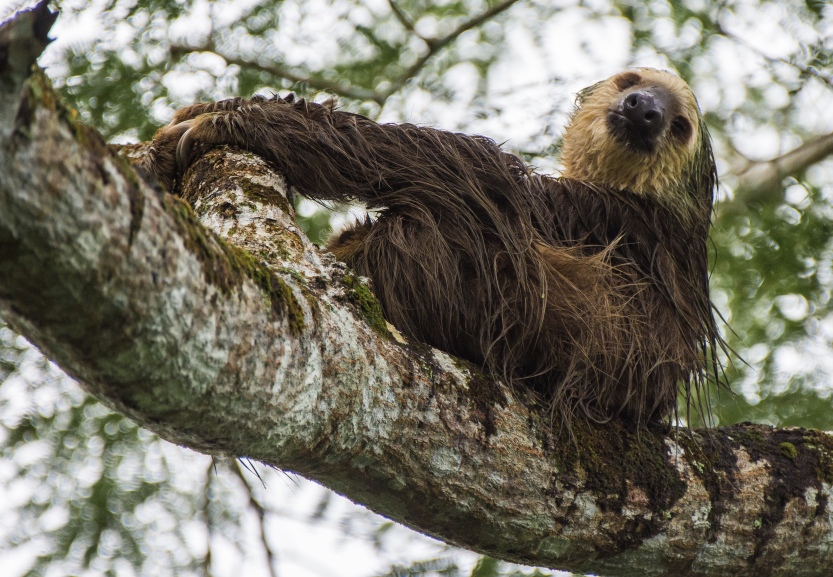 I headed over to the trees looking for a brown ball of hair with a face that wouldn’t be out of place in a Star Wars movie. I didn’t need to search for long. The morning had been a washout with grey skies and torrential rain. The afternoon sun was trying to wrestle the clouds open. Now was the chance for the sodden animals of the rainforest to dry off and warm up. In those first droplets of sun I finally had my proper Two-toed sloth encounter.

Further Reading – If you have a thing for sloths then I can’t recommend Sloths – Life In The Slow Lane highly enough. The book is written by Rebecca Cliffe and includes wonderful photography by the talented Suzi Esterhaz. Best of all, a significant amount of the proceeds from book sales goes straight back to the Sloth Conservation Foundation.

Join the conversation below. Have you encountered a sloth? Where did you see them?