It had been a chilly winter’s night in Savannah, Georgia, but my hopes of seeing my first wild American Alligator were undiminished. In my heart I felt the that the unusually cold nighttime temperature had killed my chances of an encounter with America’s iconic reptile. But with the gentle warming winter sun on my side, all was not lost.

I was in Savannah for a couple of days work, but took the opportunity of tagging on a weekend away from New York’s winter freeze. I had searched for alligators in Florida a couple of times without success, so when I read that the alligator’s range extended as far north as Georgia and through into the South and North Carolina, I knew what I would be doing with my weekend.

I was too early to check-in at the hotel, so drove straight from the airport to a local wetland. I approached the first lake full of excitement and expectation, fueled by the bright yellow signs warning of ‘common’ alligators. 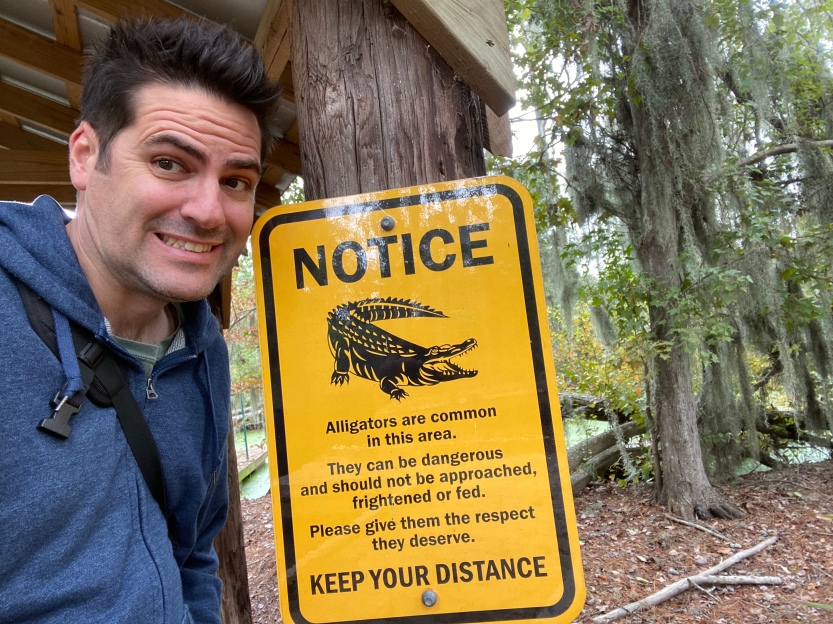 The lake was smothered under a blanket of duckweed. I scanned the surface for any unusual bulges. I had imagined my first sighting would be two beady eyes peeping out of duckweed mounds.

I spotted a movement and my heart skipped a little. The duckweed parted, as a bullfrog popped up. Then, another movement as a small black lump lifted the duckweed. Surely this was what I had been searching for. I locked the lens onto the mound and zoomed in, only for my eye to be met by that of a Yellow-bellied Slider turtle. Not an alligator in sight!

The next morning I was up and out early, as I headed to the Savannah National Wildlife Refuge. Back in the 1700s these wetlands were rice plantations, where back-breaking farming conditions were the norm, under malarial clouds of mosquitoes.

With the collapse of North American rice farming, in 1927 the 3000 acres of freshwater fed by the Savannah River became part of the 31,551 acre wetlands now known as the Savannah National Wildlife Refuge.

I arrived at the visitor center where I picked up a map of the 4 mile Laurel Hill Wildlife Drive. The warden told me that, contrary to my expectations, the conditions were perfect for alligator viewing. The sunny day that followed the cold night would provide the alligators with the heat that they need. As the sun rises the alligators often haul out to soak up as much of the energy giving sun as the short days allow.

The excitement was back on! Perhaps this would be the day that I would see my first American Alligator! I drove the couple of miles to Refuge and turned into Wildlife Drive. Immediately the car is surrounded by wetlands made up of open water, canals and reed-clogged swamp. Much of the road is bordered with trees, melting with blue-green stalactites of Spanish moss.

High on anticipation, my head was on a swivel as I studied every square of water and every inch of bank. Egrets, herons and ibis stabbed at fish and crustaceans, but after the first mile or so there was still no sign of an alligator. I was beginning to think that the elusive reptile would once again evade me.

I drove a little further and entered a heavily treed stretch of road. As I cleared the trees the wetland opened up to some open water. I stopped and studied every log and reed bank. Easing off of the brake, the car rolled forward at walking pace as the open water channeled into a reedy stretch alongside the road.

My eyes scanned the floating logs which I studied in search of baby alligators. Wait! In amongst the coffee brown saturated logs was one large shiny graphite log. I jabbed the break and shouted ‘ALLIGATOR!’.

I fired off some shots through the car window but I couldn’t get a good angle. I gently opened the car door and slipped out, edging to the top of the bank. My mind was racing; I was certain that the chilled-down alligator would have no interest in making a breakfast out of me, but I was concerned that the alligator would sink below the surface never to be seen again.

Of course, the alligator had no interest in anything that I was doing. Not a movement. Not even a ripple. I fired off all the shots that I wanted, without getting too close or disturbing the majestic creature in front of me. Reluctantly, I climbed back into the car and left the gator in peace. It turned out that the first gator marked the start of a further 3 miles of fantastic alligator viewing. A few hundred feet later and I spotted what looked like a couple of small fallen branches sticking out of the water. A little more scrutiny revealed a toothy grin at the end of the branch and a trail of scaly ridges running down its back. These were baby alligators that had grouped together in shallow water, away from the chomping jaws of the bigger animals. 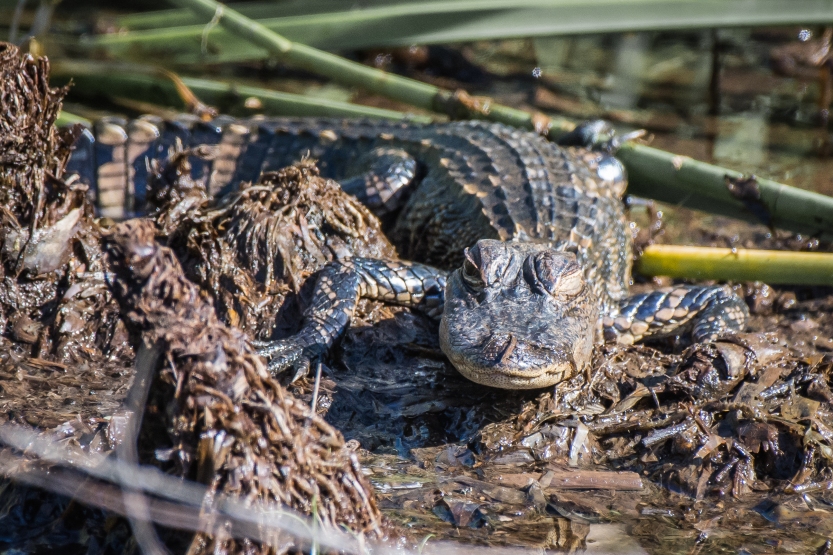 I pulled the car into a parking area and went for a short walk along the high steep bank of one of the canals. The air fluttered with the wings of Common Buckeye and Gulf Fritillaries, as well as Savannah sparrows. On the opposite bank a gator grinned from a platform of flattened reeds.

I walked back to the car and climbed in and started the engine, when something caught my eye on the opposite bank. Wildlife drive had been hit hard by hurricane Dorian, so there was a lot of construction equipment on site to undertake repairs. Lying on the bank alongside the construction material was a huge alligator. Construction workers face many risks on a daily basis, but I couldn’t help but think that this exciting risk would be a new one for most workers.

A little further down the road I watched another huge gator cruising through up river with silky smooth movements. It didn’t appear to have any particular destination in mind. In my mind it was just enjoying the sun on its back and the feel of the water holding its enormous bulk. 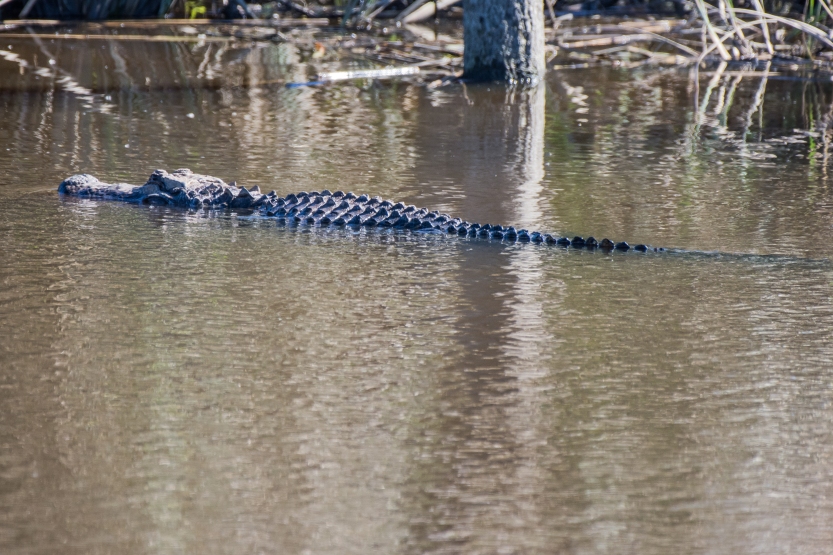 The American alligator is a huge reptile. Specimens in excess of 13 feet (4 meters), weighing in at over 800 lbs. (363 kg.) have been scientifically verified and documented on several occasions. Seductive rumours abound of specimens claimed by hunters in Florida and Texas of a touch short of 20 feet (6 meters).

There are only 2 species of alligator in the world, the other living in China. As opposed to crocodiles which live in the world’s tropical zones, the alligator can tolerate much colder temperatures. In the United States the alligator lives in the warm Southern States but also on the East Coast where it ranges from Florida to North Carolina.

It isn’t uncommon for temperatures to drop well below freezing on the East Coast, sometimes for extended periods of time. In these hostile conditions the alligator does something very unusual. As the water begins to freeze it will lift its snout clear of the water and allow itself to be frozen. Locked in ice with just its snout clear to allow it to breath.

Alligator numbers suffered serious decline due to hunting and habitat loss. Those two classic human contributions to the wellbeing of the planet. In 1967 the American Alligator, threatened with extinction, was added to the Endangered Species list. It took just 20 years of focused conservation efforts to be able to remove the alligator from the list. They are now recognised as being back to a stable population of Least Concern.

With hunting no longer an option and the trade of alligator parts subject to strict controls, farming for hides and meat has taken the place of hunting. I’m sure this has played a part in protecting wild populations, but it is difficult to get comfortable with the idea of these prehistoric creatures having their life snuffed out in service of making shoes and handbags. 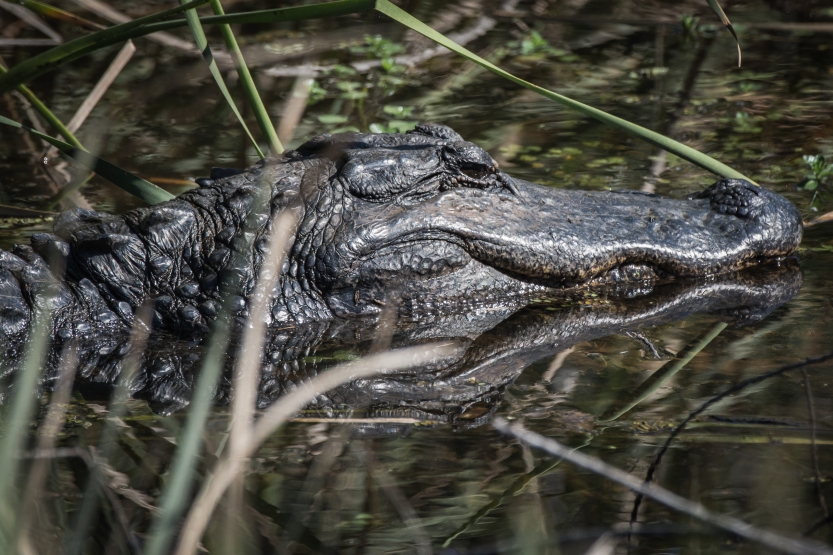 Finally, I had seen my American alligators, and in much greater numbers than I could have dreamed. I drove the 4 mile circuit twice and by the end of the two drives I had seen in excess of 30 alligators.

I settled down in The Pink Pig restaurant and devoured a delightful platter of southern cooking, while reflecting on another phenomenal wildlife experience. With a little effort and a few extra dollars, I had turned a routine business trip in to an extraordinary encounter with a modern-day dinosaur. This is what being an Incidental Naturalist is all about.

Join the conversation below. Have you seen a wild alligator? Where would you recommend for ethical alligator viewing 👇👇👇