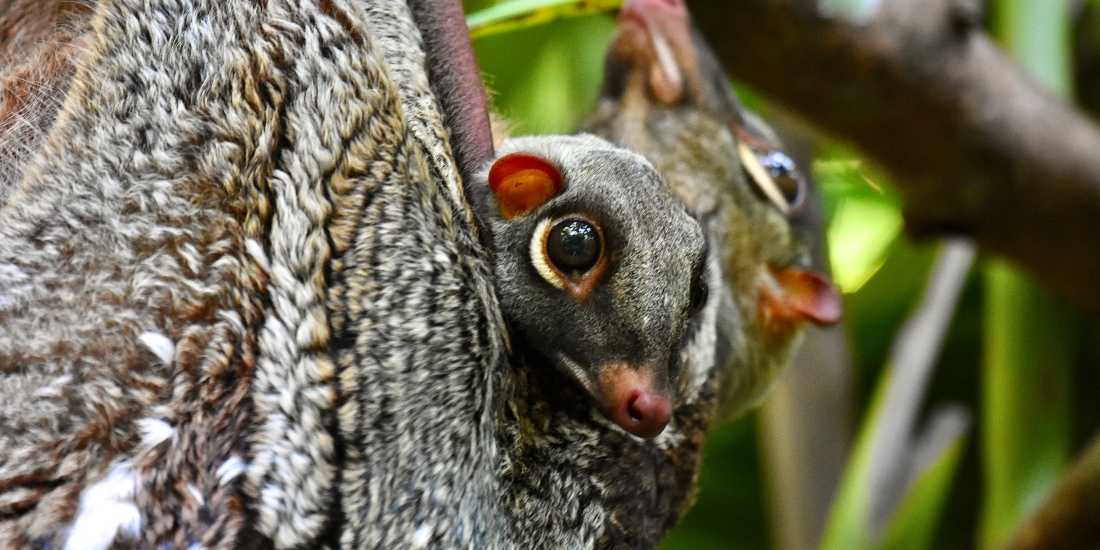 In the steamy jungles of South East Asia lives a peculiar creature. A small cat-sized tree dweller that appears to be part squirrel, part lemur and part fruit bat, but is unrelated to any of these animals. Why part fruit bat? The Sunda Colugo has a surprise – it can fly!

A few days after arriving in Singapore I made my way to Bukit Timah Nature Reserve for an evening walk. I had not acclimatized to the unforgiving heat and choking humidity, so an evening stroll in the green of the forest brought a small but welcome drop in temperature. It was my first time in Bukit Timah in a decade. The forest welcomed me back with a cicada serenade. My senses were uber alert as they struggled to readjust to the tropical jungle environment. A macaque monkey crashed through the canopy, flushing out a low swooping, tail flourishing Racket-tailed drongo bird. I stood still for a while, just listening and letting my eyes adjust to the greens and browns, and to the komorebi of the dying evening sun.

The forest pulled my eyes to a strange deformation on the tree trunk. A lump that just didn’t seem to fit. Slowly; ever so slowly, the lump turned its head and my gaze met with the two sparkling chestnut eyes of a Sunda Colugo.

My heart skipped with excitement! The colugo is not an animal that your eyes and brain can easily process. It isn’t like seeing a rabbit or an otter; these are creatures that we can relate to and understand from tv shows or children books. No, the colugo takes time to process. The bulging nocturnal eyes, the impossible camouflage, the grappling arms, the blanket of skin that unfolds into a furry kite; Nothing about it makes sense! I waited for it to run or fly or climb, but it just stared at me. I took some shots because this is an animal that demands to be photographed. After a short while I noticed that the colugo was slowly drifting around the trunk, moving almost imperceptibly, as it faded out of sight around the back of the tree.

The Sunda Colugo is relatively common with a conservation status of Least Concern. It ranges throughout South East Asia, from Myanmar through to Indonesia. Growing up to 42 cm (17 inches) with a cloaked tail adding up to an additional 27 cm (10.6 inches), this is a good sized creature to find glued to a tree trunk. Despite its squirrelish habits and alternate name of Flying Lemur, the colugos are in a family of their own, with two distinct species living in Asia. The colugo cannot actually fly, but using a the skin flaps that connect to each of its limbs and tail, it can glide for over 100 meters, as it searches the trees for the tastiest fruits and tender leaves.

The fur of the Sunda colugo can range from silver grey, through brown to a rufous rust. It’s mottled and spotted coat is designed to melt into the habitat of rough bark, mosses and leaves. The fur alone is a wonder of the natural world. There are very few mammals with such an astonishing camouflage.

I stood in drop-jawed amazement as I studied the bizarre critter. The fur on the head had an appearance of pollen-dusted yellow. The mottling of black, silver, gold and white allow the colugo to fit like the final jigsaw piece in the puzzle of the lichen scarred tree bark. It’s almost as if each colugo has been handmade to fit the trunk that it is found clinging to.

I have been fortunate to have seen several colugos since that first heart pounding encounter. They can be found in most of the country’s densely forested areas. A visit to the nature reserves at Bukit Batok or Hindhede, when the parks are quiet provides an excellent colugo spotting opportunity, as does a trip to the Singapore Zoo or Night Safari ,where they are often seen living wild in the extensive and green grounds.

My next colugo sighting was at a good height to superbly show off its silver grey camouflage. I photographed it and videoed it and went away pleased with the experience. The surprise came when I got home and examined the photographs. A close look at the left side of the animal revealed a tiny baby colugo nose poking out from beneath mother’s dress. I was thrilled and devastated in the same moment. I had missed the chance to spend time watching and properly photographing a baby colugo. I felt that this extraordinary encounter may never be repeated. I had seen images of the babies in articles and had dreamed of seeing a mother and baby in the wild.

Only 3 days later during a walk through Bukit Batok Nature Park my fears of missed opportunities were put to rest. Low on a tree trunk alongside the main walking path hung a bright-eyed and beautifully marked grey animal. She was unusually alert and particularly photogenic, I thought.

I stood close by taking some photos of her, admiring those beautiful eyes with the long lashes and white eyeliner. I was momentarily distracted by a small flying lizard that scampered up the trunk beside her, lapping up ants as it went. I looked back at the colugo as she started to fidget. Then it happened; the folds of her silver dress opened and out popped a tiny face. A baby colugo!

The curious little face was all eyes and pointed nose, as it sniffed at the forest air. It stared straight at me. It didn’t appear to be concerned by my presence. It looked like it was just interested in what I was doing at the base of the tree. I took photos – lots of photos, until it was time to leave them to get back to doing whatever colugos do all day.

A few weeks later at different local forest, I spotted another mother and baby colugo. This time they were higher in the tree and more challenging to photograph, but in contrast to the grey mother, this baby had spectacular star-speckled rufous fur. The tiny redhead with a short nose and huge eyes looked like a very young baby indeed. I took my photos from an awkward and uncomfortable position and was thrilled to capture the little face that looked down for a few moments before shrinking back into mother’s dress.

My unrealised ambition is to photograph the colugo in flight. I have seen them gliding through a dusky forest on a couple of occasions, but the patience and the photography ability required to capture this magical moment after dark are just out of my reach at this moment. But a close encounter of the colugo kind gave me the next best thing to a flying shot. During a Sunday morning walk through Bukit Batok I spotted a colugo mid-maintenance of the skin folds that form its furry kite.

Glued to the trunk of a tree, the colugo stretched each limb in turn and in doing so it opened up the glider skin for grooming. The importance of the gliding components was clear to see, as the colugo spent an extended amount of time cleaning every millimeter over and over again.

I did manage to get a single twilight shot of a colugo as it swooshed unexpectedly overhead, landing with a clatter of claws on a high tree trunk. When you wear a long fur coat all the time it makes peeing and pooping a little challenging. The colugo showed me how it keeps the coat clean as it folded tail and glider over its back before lightening its load ready for the next glide.

The unassuming Sunda Colugo is one of the rock stars of the forest. A shy creature that comes alive at night but wants nothing more than to be invisible in the daytime. It is extraordinary how many casual hikers walk past the camouflaged colugo without realising it is there. A few spot them and know what they are looking at and smile at their good luck. Most who spot them make wild guesses about the species of bat that they are looking at.

As for me, I still gaze in wonder at the beauty, the astonishing camouflage, the unlikely face and those weird skinny wingy things. I always take a photograph because I feel privileged to see such a remarkable animal thriving in a city state and I refuse to take sightings like these for granted.

Join the conversation below👇👇👇

Consider following Incidental Naturalist. If you don’t have a WordPress account you can follow via email. No sales because I have nothing to sell. No spam emails.