I love unexpected or incidental wildlife encounters. There is something very satisfying about planning a successful trip to see rare, iconic or bucket list wildlife, but very often we feel a sense of sadness at the struggles that these creatures face, simply to exist. With an incidental encounter in an urban setting, we often walk away with a sense of hope, because the species and humans have learned to co-exist. One creature that has found a way to thrive in suburban Australia is the Powerful Owl.

I had heard from a friend that there was a Powerful owl living in Sydney’s Royal Botanic Gardens. My office was just a few minutes’ walk from the Gardens, so I took regular lunch break strolls through the trees, hoping to check-off my first sighting of the owl. This went on for a about a year, with no success; I was looking for a needle in a haystack. At the end of my first year in Australia I moved to an apartment beside the Gardens, which meant that my daily walk to work took me through or alongside the beautiful urban park, but still no sign of the owl.

One sunny Sunday morning, I set off through the Gardens towards Circular Quay, where I had booked tickets to go out on a whale watching boat in search of Humpback whales on their northern migration. Approaching a dense crop of bamboo, I could hear the sound of Australian magpie and the ever-present Noisy miners aggressively scolding something deep within the bamboo. I reached for my camera; I knew long before I saw the bird that this unrelenting scolding was nature’s message to me that I had waited for long enough; now she would reward my patience by revealing the Powerful owl.

We read in field guides that this is a prodigious owl, but despite the books giving us sizes in centimetres and inches, nothing really prepares us for the sight of a huge owl, with burning eyes, in broad daylight, in the middle of a major international city.

Fortunately I was early for the whale boat, so I had time to capture some photographs. The bird was in the gloom of dense foliage and backlit, which made handheld photography a challenge, but I fired off a few shots and attracted a small crowd of Sunday morning walkers and joggers, all stunned to see such a mighty bird. 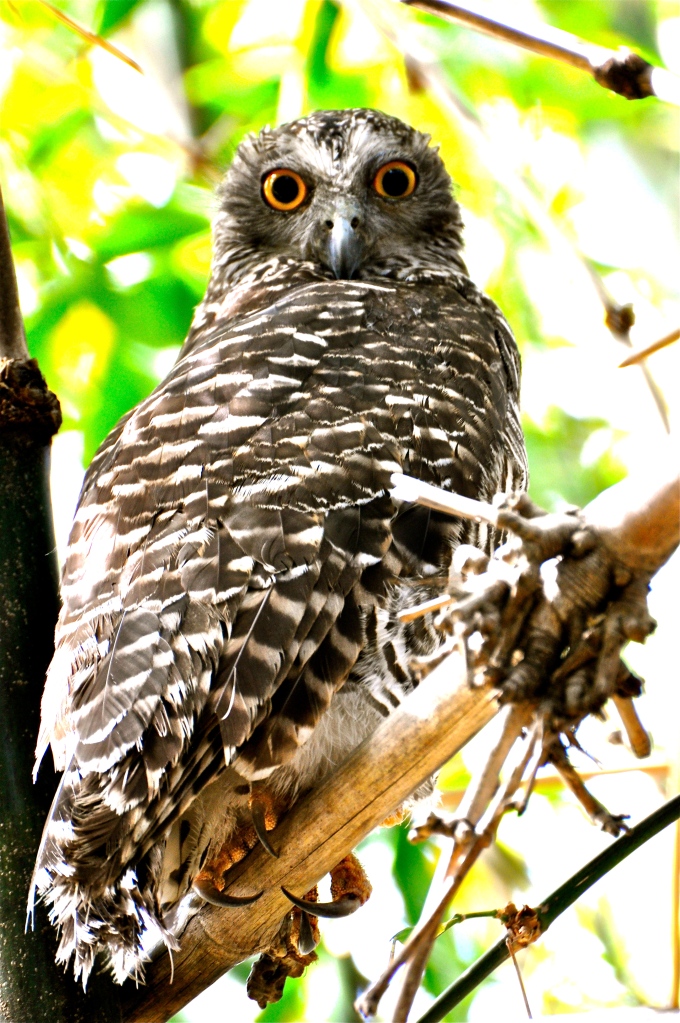 The appropriately named Powerful owl cuts a magnificent figure, standing at 45 to 65 cm (18 to 26 inches), males being larger than the female, and with a wingspan of 112 to 135 cm (44 to 53 in).  The long tail and small head gives this owl an almost hawk-like appearance, but the eyes are unmistakably those of an owl. The huge, powerful claws serve as the chief weapon in a diet made up of relatively large prey such as possum, Sugar gliders and even Koala!

With a conservation status of ‘Least Concern’ the bird can be found in the south east corner of Australia, from southern Queensland, following the coast through New South Wales, Victoria and in to South Australia along the eastern side of the Great Dividing Range. The owl is endemic to this part of Australia.

I only saw the Powerful owl once more in the Botanic Gardens (in the bamboo bush, again) but I did find another, more reliable place to see the owl in Sydney – Centennial Park.

There is a coffee shop in Centennial Park, which proved to be a lifesaver for a parent of a young baby. The coffee shop has an area of decking which is the perfect spot to enjoy the benefits of the life giving bean in the early morning sunshine. There is a large tree in the middle of the deck that the timber decking has been constructed around. If you find yourself enjoying a coffee in the shade of this tree, look up. You might see an owl looking down at you, or if you are really lucky, you might see the breeding pair who often frequented the canopy while I relaxed on the deck below.