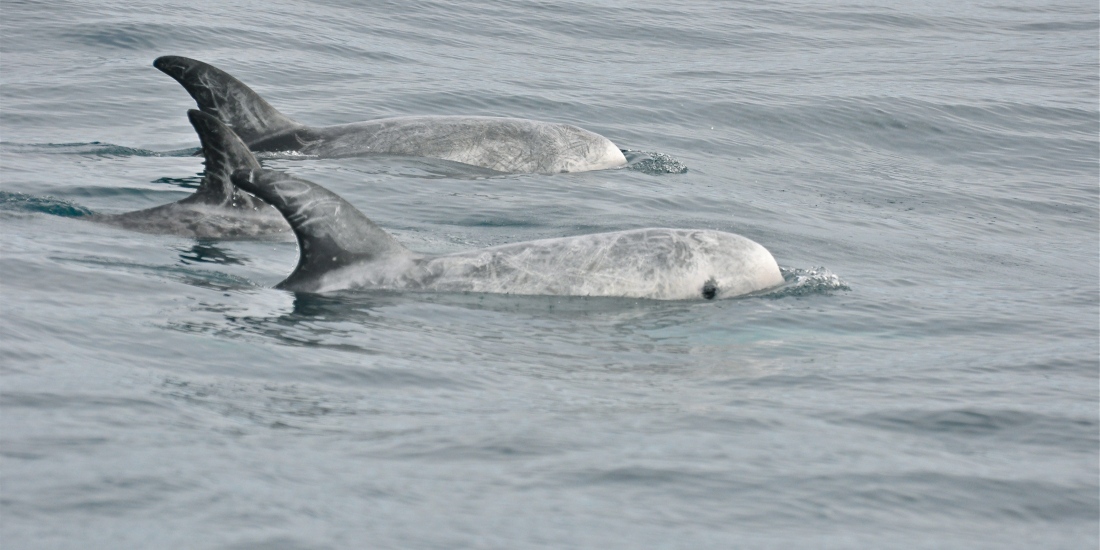 On a cold January morning in Monterey Bay, California, I boarded a whale watching vessel in the hope of catching an early glimpse of Grey whales, making their great southern migration. As the boat cast-off and began to trundle through the harbour, the rhythmic sound of engine knock was disrupted by the barking of California sea lions, waving us out from the harbour wall. The boat picked up speed and the cool air, heavy with moisture from the misty rain, chilled my face. I took another slurp of hot, strong black coffee.

It was not the best time of year or the best weather conditions for whale watching, and it certainly was not the best light for photography, as the heavy sky showed its full 50 shades of grey. Nevertheless, I was optimistic that I would see some marine mammals, and pelagic birds. We were not long into the journey when the first of the cetacea broke the surface. The Long-beaked Common dolphins had appeared.

Over the next few hours I was fortunate to spend some time with the Common dolphins, a couple of Grey whales and a young male Humpback whale. A sentence in a blog post doesn’t do justice to the enormous privilege that it is to experience an encounter with these ocean-going creatures.

As we turned south to cross the bay, a different species of dolphin appeared, as a group of fins simultaneously broke the surface. These fins belonged to a pod of Risso’s dolphin.

Despite taking many boat trips, in various countries, in search of marine wildlife I had never seen a Risso’s dolphin. This is a surprise due to the fact that these are one of the most widespread dolphins, occurring in both temperate and tropical waters.

The first thing that I noticed about the Risso’s dolphin was the high, curving dorsal fins. The next thing was what appeared to be a slower, more serene movement through the water. This was in clear contrast to the fast, erratic, shorter finned Common dolphins. As the Risso’s dolphins started to  break the surface, curiously, to study the contents of the boat above them, they reveal their blunt-nose faces.

The next thing that I noticed was the white face and mottled, streaked body, with colouration ranging from dark grey through to white. This is not the dolphin’s natural colour. Risso’s dolphins are born a uniform grey colour, but their diet of large, aggressive squid, who defend themselves to their certain death, with beaks and tentacles, leave them scarred with swirling lines and white skin. The older the dolphin, the whiter the colouration.

Risso’s dolphin is one of the largest dolphins, weighing in at over 1000 lbs. (500 kg) and growing to over 15 feet (3.8 m) in length. With the exception of the Orca, it is the largest dolphin to visit the Monterey Bay Area. This species usually spends its life beyond the continental shelves of the world, in the great open ocean. It is thought that up-swelling current over an uneven bottom of Monterey Bay, produces feeding opportunities that usually only exist further from shore. Recent estimates suggest that around 15,000 Risso’s dolphins live off the coast of Caifornia.

I never get tired of seeing dolphins, whether from a boat or the beach. It is always a special moment as they surface, that I cannot tear my eyes from. But so far, for me, the Risso’s dolphin has been my favourite dolphin sighting. It is definitely worth a trip to Monterey Bay, to see these unusual dolphins so close to the shore.

I didn’t head out on to the water that morning to see Risso’s dolphins and if truth be told, I didn’t know anything about them until I saw them. As it turned out, I couldn’t help but feel a little disappointed to leave behind these wonderful creatures to continue our hunt for their larger cousins, the great whales.