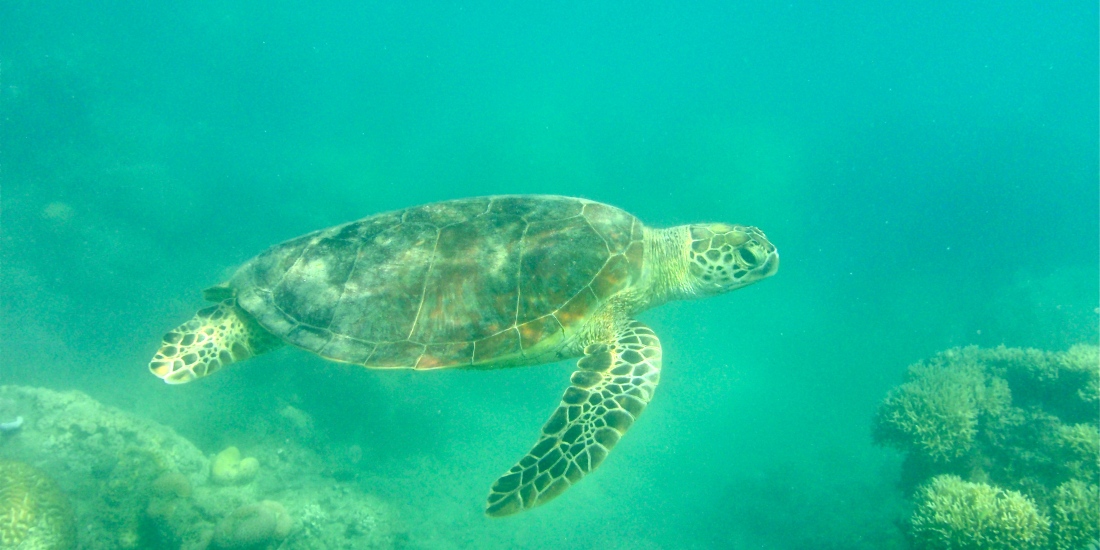 I was fascinated by wildlife as a child, and was a keen supporter of the conservation efforts of the time. The plight of the Green Turtle was at the forefront of these efforts. It seemed that this great wanderer of our vast oceans, that we knew so little about, was doomed to extinction.

Many years later, I found myself with an opportunity to visit Queensland, Australia. Despite a general mistrust of water, never having been a confident swimmer, I could not allow myself to travel so far and be so close to the Great Barrier Reef without seeing it. I signed up for SCUBA diving lessons, passed the test in a chilly autumn UK granite quarry and set of for the land Down Under.

My first dive and snorkel experiences on the reef were extraordinary moments in my life. As the underwater world was revealed to me, I felt like Howard Carter cracking open the tomb of the  great Egyptian King, Tutankhamen, for the first time. The Reef was a veritable treasure chest of spectacular colored corals, odd shaped fishes, enormous mollusks and industrious invertebrate. I was mesmerized by the extraordinary sights beneath me and the sheer volume of life. I returned to the boat in awe of the reef, but my dream of seeing a turtle evaded me.

Five years later, my first fleeting sight of a turtle came while on a ferry off the coast of Singapore. For a very brief moment, in the waters around Kusu Island a turtle surfaced for a few seconds, took a breath and dived again. Gone! Four more years passed and still no more turtles, but now I was living in Australia and had booked my second visit to the Great Barrier Reef.

We booked a day boat snorkeling trip to the Low Isles with Sailaway Reef and Island Tours and set off bright and early. I bought a strong black coffee and boarded the catamaran. The boat left the picturesque Reef Marina at Wharf Road, Port Douglas and headed out to sea for the 8 nautical miles journey to the Low Isles. We chose this tour as the combination of short journey time, sheltered waters, sandy palm-shaded island beach and glass bottom boat to shore meant that my 18 month-old could join us on the trip.

During the sun-soaked journey over the coral-carpeted ocean bed we were, at times, flanked by dolphins as osprey wheeled in the sky above. This part of the world is rich with marine life that it would take a lifetime to explore. The boat arrived at the Low Isles and dropped anchor off shore. We transferred to a small flat glass-bottomed boat to skim above the reef to the island beach.

I picked my way down the hot coral sands and waded into the clear, warm water, flopping down face first. Here the reef is not so colorful or exotic, but still the alien world of coral and fishes came to life before my eyes. The creatures accepted me, unquestioningly into their world, seemingly without any concern for their safety. Floating face down, the world seems to slow as I drifted with wind and tide, taking thick, heavy, noisy breaths through the snorkel. I look up as a shape began to come into focus. A greenish shadow that became darker as it drifted towards me. As it came clearly into focus my heart started to thump; a Green Turtle!

The turtle was not huge, but it was big and it was in front of me. It lazily drifted underneath me and I allowed myself to drift with it. The adult Green turtle is one of the largest of the sea turtles, growing to a length of up to 47 inches (119 cm) and weighing up to an enormous 400 pounds (181 kg.). Contrary to popular belief, the turtle takes its name not from the colour of its shell or skin but from the colour of its fat under the shell.

The Green Turtle is classified by CITES as ‘Endangered’ with a declining population. As well as still being hunted for meat in tropical waters, many Green turtles die as a result of drowning in commercial fishing operations. Habitat destruction of egg-laying beaches and coral reef also plays a major role in the species decline. In recent years, specimens have been found suffering from tumors which may be as a result increased levels of pollution in our oceans.

I was fortunate to see several more turtles during that trip. Some whilst snorkeling around the island, a few while on the glass-bottom boat and a huge female with a missing front flipper while visiting the deeper parts of the Reef. My 18 month-old has not had to wait 40 years to see his first Green turtle, as he was able to watch, wide-eyed as several cruised beneath the glass-bottomed boat.

Back at the island, the turtle moved slowly around the coral, sometimes beneath me and sometimes alongside me. We stayed with each other for about 20 minutes, neither of us moving a great deal, just caught in drift that was for me an enormous pleasure and a privilege. I felt that I could have stayed their all day but this was the turtle’s world and I did to want to out stay my welcome. I allowed myself to float away.