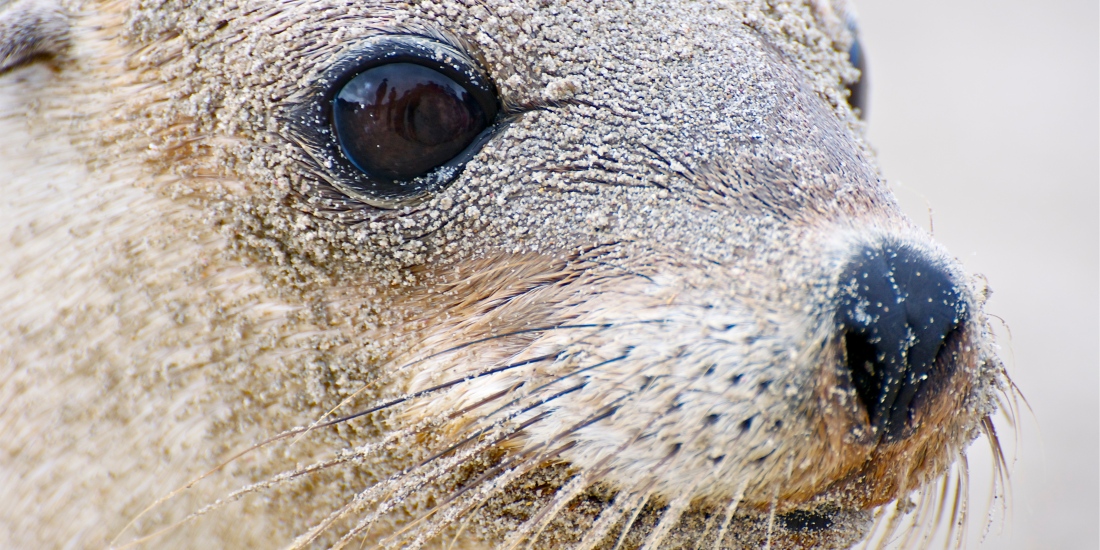 Australia is hot in December. Very hot! Kangaroo Island’s cool sea breezes offer welcome relief from the unrelenting sun that hammers her deserted, talc beaches. But not every beach on this paradise island is uninhabited. One particular beach has become home to the third largest population of Australian Sea Lions.

The changing landscapes of the weather beaten southern coast of this 93 mile-long (150 km) island are extraordinary. The far south western tip of the island, where the craggy rocks at Admiral’s Arch reach down into a churning, sucking sea, is home to an isolated colony of New Zealand fur seals.

Round the western tip, follow the southern coastline and we are soon arrive at a wind carved rock formation, appropriately named the Remarkable rocks. Arranged on a bed of scoured granite, overlooking the sea, it would be easy to believe that these wind sculptures had fallen from outer-space.

Further along, the twisted, and gnarled branches of coastal scrub reach for the sky, scorched and shaped by fire and wind. From these cliffs the occasional Black-browed albatross can been seen gliding over heaving seas that boil and tear at the rocks below.

The landscape softens a little as we follow the road east. The imposing cliffs flatten to sloping heaths that give way to soft warm sandy beaches and azure seas; we had arrived at Seal Bay. These are the soft warm sands that Australian sea lions have chosen to warm themselves under the southern sun, and raise their young.

I had read that Seal Bay was a place where, with a bit of luck, I could get close to these beautiful creatures. The beach is not open to the public but the area around the beach is accessible, and nature guides take small walking groups down on to the beach. I signed up for a beach walk. While I waited for the beach tour to begin I passed the time exploring the sand dunes around the Visitor Centre.

Wherever a raised sand dune offered shelter from the wind, I found sea lions sleeping in the sun. Many were lying in pairs, sharing their body warmth as the morning sun gently heated the sand. This was a truly wonderful sight!

I walked along the boardwalk and came across a mother sunning herself while feeding her pup on rich, fat-loaded milk. Neither mother nor baby was in the least bit concerned by my presence.

Presently, we gathered at the Visitor Centre, and a small group of around ten people made our way to the beach. Here we found sea lions traveling back and forth from sand dunes to foaming waves. We kept our distance from the animals, but the sea lions were not interested in what we were doing. They had seen it all before.

The Australian sea lion has been hunted heavily over the centuries, primarily by European settlers, but has been protected by legislation since 1964. Despite this protection, the animal remains listed as ‘Rare’ and despite some population stabilization, numbers are again declining for reasons that are uncertain.

A gang of young sea lions frolicked, with a child’s enthusiasm, at the water’s edge, while the adults watched from a peaceful distance. This scene didn’t last for long before the toddlers decided to bounce over to the mums to disturb their morning nap by nipping at flippers, and clambering all over them, eliciting irritated grunts and groans.

We stood on the beach while the Naturalist spoke to us about sea lions, and the conservation work that is undertaken at Seal Bay. As he spoke, a wet, glistening sea lion pup skidded out of the breaking waves and awkwardly wobbled up the beach. It paused to watch us for a moment before curiosity got the better of him. He wobbled towards us sitting just a few feet away.

As if wanting to engage us in a game, the pup spotted a sand sprinkled sea sponge on the beach beside him. This was an opportunity for some sea lion fun. He flopped and rolled in the sand and flicked the sponge up into the air, catching it again and nosing it around in front of him.

He flippered forward again for his close-up shot, which he kindly smiled for. So close that we can see the group reflected in his glistening black eye. Satisfied with his portrait, and convinced that we were not good play mates he bounced off along the beach to find his friends, leaving a small group of people with a wonderful memory of a beautiful encounter.

Protected beaches like Seal Bay are vital if these delightful creatures are to have a future on our planet. Encounters like the one I enjoyed, with a curious young pup, can never be taken for granted. We can continue to support the conservation of these animals by staying engaged with their struggle and with the protection of their habitat. Support for the efforts of people such as those working for the survival of the species at Seal Bay is vital.

Kangaroo Island is a great wildlife destination. Lying just eight miles off the coast of South Australia, it is easily accessible from Adelaide. Car hire is simple and affordable, and the drive through the Fleurieu Peninsular to the Sea Link car ferry at Cape Jervis is beautiful.