On a gloomy January morning I arrived at the harbour in Monterey Bay, California. I was a little early for a whale watching trip that I had booked. It was first light, and the morning was greeted by an unusual dawn chorus; the throaty bark of California sea lions. I was jonesing for coffee but I knew it wouldn’t be easy to find one so early in the morning. In an extraordinary random act of kindness, the owner of a coffee shop, making a delivery 2 hours before the shop was due to open, took pity and invited me in for a delicious, strong coffee, free of charge. This would be a great day! Standing in the coffee shop waiting for the coffee to brew, I noticed something floating in the harbour. My jaw dropped as my binoculars lifted, and focused on a small furry animal that has fascinated me since I was a child. A Sea Otter!

The next day I woke up determined to photograph an otter. I sprang out of bed before dawn and headed out into a miserable, dark, rainy morning. First stop would be Monterey harbour, where I had caught a glimpse of the otter the previous morning. I would like to say that dawn broke, but the transition between black skies, and thick grey skies was gradual and barely perceptible. The air was full of water that fluctuated between heavy mist and driving rain. This would be a terrible day for photography.

A couple of fruitless hours of searching passed when finally my otter appeared. I couldn’t get close enough for a good photograph, but after an hour of patiently waiting, the otter drifted over and I grabbed a few grey photos, with ISO cranked up and shutter speed wound down. The poor conditions for photography in no way dampened my delight at seeing this wonderful little creature.

A short while passed and my otter went to sleep. Just floating asleep. I decided to widen my search for otters, so climbed back into the car and drove the 30 minutes north towards Elkhorn Slough. Just before I arrived, I spotted a floating brown bundle in a boat channel alongside the road. I swerved into a parking spot, grabbed the camera and snapped a few shots of a delightful little otter, who was in no way camera shy. 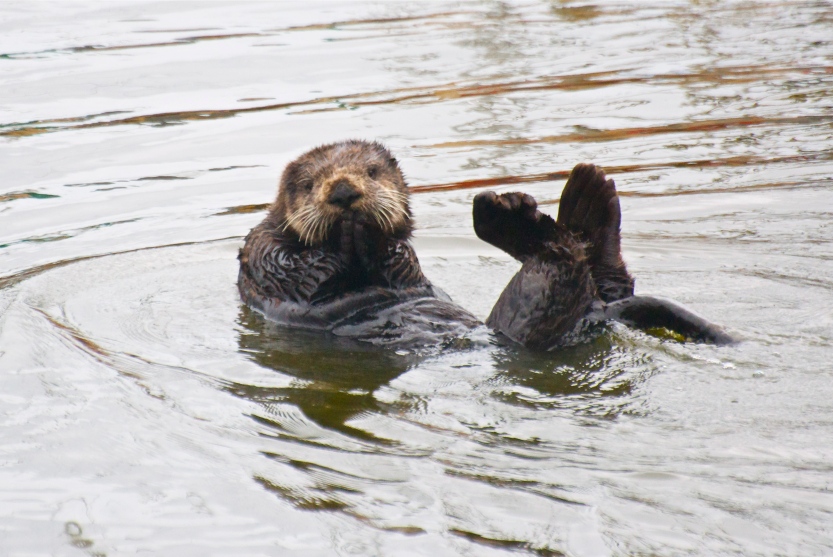 Eventually my little otter friend got bored with the attention and moved off to indulge in what appears to be a favourite pastime. Sleeping!

Back in the car, I decided to follow the direction of the channel instead of carrying on to Elkhorn Slough. The channel took me to Moss Landing harbour. The rain had now set in as a constant drizzle, but undeterred, I got out of the car and walked to the breakwater of the entrance channel to Elkhorn Slough. On this grey, smelly breakwater I found myself transported to a nature wonderland! I squelched down on wet rocks, and as the fishy smoothie of pelican poo and rain water soaked into my clothes, I waited. In no time I was surrounded by wildlife. The noisy California sea lions couldn’t resist coming over to explore. Then came the slightly more shy harbour seals, and the clumsy Brown pelicans. Coastal ducks such as Scoters where everywhere and dotted in-between these ducks, like a handful of champagne corks thrown onto the water, were Sea otters.

There are two sub-species of Sea otter. This article is about the Southern Sea otter as distinct from its Northern relative. A Member of the weasel family, the Sea otter can grow up to 4 feet (1.2 m) in length, weighing up to 70 pounds (32 kg), with females being a little smaller than males.

I noticed that the otters were not alone. Every otter that I had seen had a gull for company. After some time of watching I realized why. I focused on an otter that was active, and it started searching for food. It was then that I got to witness the behaviour that had fascinated me as a child. The otter surfaced with a clam, and a rock, and flipping over on to its back it positioned the rock on its chest. Using the rock as an anvil, I watched the otter smash the clam shell down on to the rock with several rapid-fire, audible cracks until the clam shell surrendered its soft, sweet flesh. The opportunistic gull stays close, waiting for a few off-cuts to fly its way, which it greedily devours.

I learned that if you sit in pelican poo soup, in the rain for long enough you may be rewarded for your commitment. I was rewarded! I noticed a large otter making its way along the rocky breakwater in my direction. I shuffled precariously down the slimy rocks until I was almost in the water, and waited. Presently the otter appeared in front of me and gave me the once-over. He decided that although I was clearly strange, I wasn’t strange enough to put lunch on hold for.

The otter started fishing to the soundtrack of my camera clicking multiple shots. He made a couple of dives in front of me before surfacing with the biggest, fattest rag worm that I have ever seen!

Flipping on to his back, the otter chewed noisily on his prize as if it were a salami stick. The struggles of the worm were ended with a few swift chomps to the head and the worm was gone in under a minute. A swift face wash and straight back to business, diving a couple more times before popping back to the surface victoriously with another fat worm.

In order to float, and keep warm in the chilly Pacific waters, the sea otter possesses something that has been its blessing and curse; the Sea otter has the densest coat in the animal kingdom. This remarkable pelt, that has allowed the otter to be so successful, was a prized possession for the fur hunters and traders of the 1700s.

It is a little known fact that the Sea otter has been one of the most influential species on the planet. Not only is it a keystone species that keeps the massive underwater kelp forests alive by devouring the kelp-munching sea urchins, it has also shaped one of the worlds most important borders. The northern population of otters were discovered by Russian hunters in 1741, and by the end of the 1700s Russian, American and British hunters were decimating the otter population down the length America’s west coast. As the population collapsed, so did the value of the land that they had lived on and in 1867 Russia sold the otter-less chunk of land that we know as Alaska, to America for $7.2 million. The Sea otter, or more accurately, the lack of Sea otters, gave America her largest state. 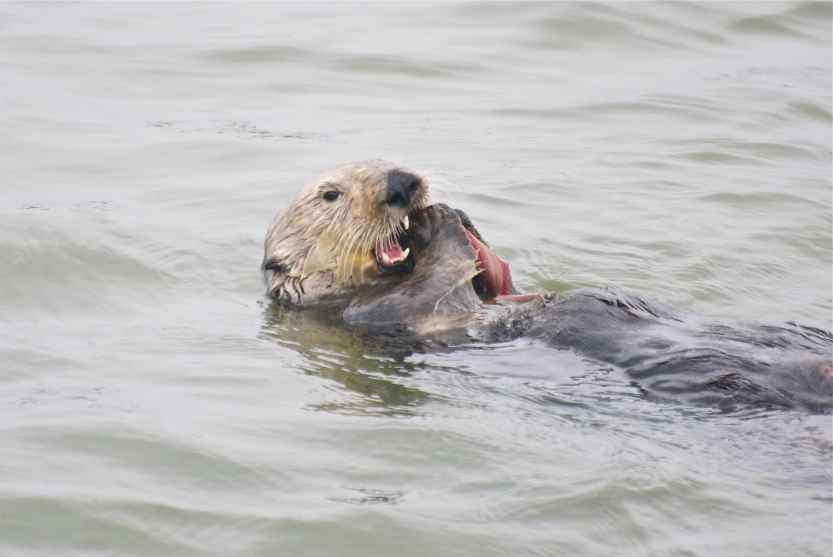 I hope that this bucket-list, once in a lifetime opportunity to see Sea otters will be repeated. Monterey Bay and Big Sur have an embarrassment of wildlife riches available to us without stepping off the beaten track. I hope to get back to see some of the other incredible species, and to photograph this keystone, border-shaping, tool using, beautiful, amazing animal in the sunshine.