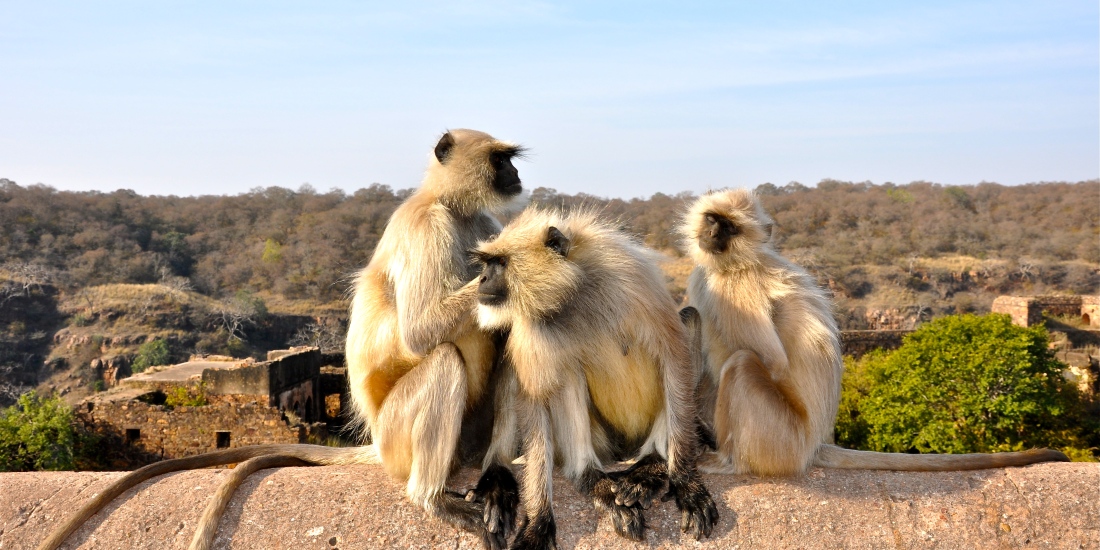 According to Hindu scripture, during the great battle of Lanka, Hanuman, the monkey god, was in trouble. He had been captured, and fires raged all around. Help came in the unlikely form of a troop of Grey Langurs, who rushed to assist Hanuman, resulting in scorched black faces, and a revered status in Hindu culture that persists to this day.

On the first drive through the park I encountered Grey Langurs in their natural habitat, standing guard from treetops, barking a tiger alarm to wildlife foraging below. It was not until later, when visiting UNESCO site, Ranthambhore fort, that I began to understand the cultural significance of this animal.

Ranthambhore fort is within the national park boundary, with access to the old fort ruins only possible by foot. As I approached the main area of the ruins, I was struck by three things: It was clearly a place of intense worship, there were clouds of pigeons, and there were langurs, everywhere.

I arrived at the main ruins to find every stretch of wall adorned with monkeys, like statues, in the amber glow of the Indian sun. It is an intimidating experience to walk through a huge troop of monkeys that are studying your every move. I had encountered troops of macaques in other parts of Asia, and knew that they could be very aggressive. It felt like a scene from the movie Apocalypse Now, arriving at Colonel Kurtz’s jungle camp while his warriors look on in impassive silence. Very quickly I realized that these monkeys are not aggressive as they sat, relaxed and somewhat disinterested.

I was able to approach the langurs, and get very close without them showing even the slightest concern. When revered as a warrior of the gods it appears that you have very little need to be fearful of humans.

Small groups of langurs positioned themselves along the main walking path, through the ruins, to the temple at the far end of the fort. I walked the path, entered the temple and paid my respects to an orange painted icon of Hanuman. I shared no language with the guardians of the temple, but as is so often the case, we communicated through smiles and human values. I was given a sweet, spiced offering with a motion to eat it. Some offerings were taken by worshipers to the langurs along the path. Perhaps this partly explained the reason for the guard of honour that they gave to worshippers.

The langurs spent large amounts of time grooming one another, sunbathing or (as seen below) just airing themselves in the fresh air and gentle warming sunshine of a December morning.

The Grey langur is a large primate, growing to around 68 cm (27 inches) in height, and weighing in at around 17 kg (37 lbs), with males a little smaller than females. They have been recorded as living for over 30 years, which is not surprising considering the life of luxury they appear to enjoy.

It isn’t all peace and relaxation in the monkey troop. The entire adult group is female, presided over by one Alpha male. It appears to me that he has three duties in life which are to protect the troop, rest frequently, and mate with every female as often as possible.  He certainly appeared to take two of his jobs very seriously, setting about them with a steely determination. This may seem like an idyllic life for the Alpha, but reality is that he will only hold this position for around eighteen months, at which time a new boss will take over. The new Alpha’s first job is to kill the infants in the troop. This grizzly behaviour ensures that his reign is successful in producing his own young as soon as possible, and in doing so, guaranteeing the future of his genes.

India is hot, and dry, and liquid isn’t easy to come by. Back at the car parking area a leaky tap provides a welcome drink for thirsty langurs. They wait in line and take turns to drink.

Even the babies need a drink from time to time, to compliment mum’s milk. This little guy (below) waited patiently for mum to slake her thirst first.

As I walked to the exit of the fort I watched a powerful demonstration of the reverence in which this monkey is held. A family walked the stone path, carrying a bag of belongings, including a snack or two. A large, active monkey leapt down from the walls above, and with the sense of entitlement of a spoilt child, ripped open the bag, looked inside and grabbed what it wanted. In some cultures it is not difficult to imagine this behaviour being met with a swift kick. Here the moment was met with mirth from the ladies and the unlikely scene of the man reasoning with the monkey that perhaps this wasn’t the most appropriate behaviour to engage in.

The Grey langur is protected by Indian law, despite being listed as ‘Least Concern’. While I welcome this protection, it feels a little unnecessary as it is clear that it is respect for this revered creature that guarantees its ability to survive and thrive. The belief that the god Hanuman protects Hindus ensures that in turn the Hindus protect Hanumans warriors. If a Grey langur is found dead a funeral service is held with the same level of service and dignity afforded to a human.

My own experience of the Grey langur was not one of a warrior monkey charging selflessly into great battles between gods. When I looked into the face of this young monkey (above) all I could see was a beautiful, shy creature, surviving in the same world that I am, in its own way. One wonders, though, what that world could look like if all wildlife was afforded the same respect that has been afforded to the Grey, or Hanuman Langur.