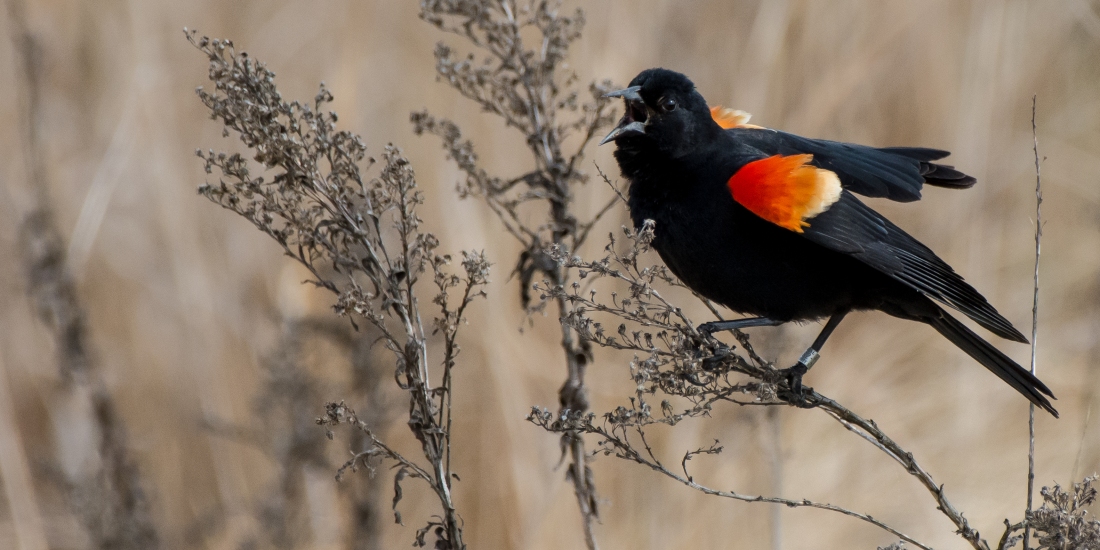 If you are reading this in the United States of America, you might be wondering what is so special about the common or garden Red-winged blackbird. This is one of the most numerous birds in the country, with a population estimate of around 190 million across the North American continent. Widespread, the Red-winged blackbird can be found breeding in every state in the United States of America, except for Hawaii.

I may have lived in the USA for three years, but I still feel delight every time I see this boring old bird flit by. My first encounter with the Red-winged blackbird was a lone male along the banks of the Chicago River. It was clearly a magnificent little bird, but it wasn’t until I made a trip to Cape May, New Jersey that I really fell in love with these feisty little show-offs. I parked the car at Cape May lighthouse, and walked the path that snakes between the lake and sand dunes, that role down to the Atlantic Ocean. I followed the track on to a meandering boardwalk that snakes through vast reed beds. For most birders, the Cape May star attractions are the migrating hawks, high up in the sky, or the water fowl, drifting on the surface of lake, or ocean. I was enthralled by the show that occurs in the middle band at the top of the reed line, where Red-winged blackbirds stake their claim to territory, with dance and songs.

For the male Red-winged blackbird territory is everything, for it is in this claimed patch of reeds that he establishes his hareem. He makes, and maintains his claim to an area by perching on the highest, most visible twig or reed, where he blasts out his song. This song is accompanied by a flamboyant dance, choreographed to illuminate the stage with his fiery epaulettes. He will aggressively defend this territory from all comers, be that love rivals, other bird species or even people.

A strong male with a high quality territory can enjoy a hareem of up to 15 females. Each female will weave a grassy nest low to the ground, where she will lay up to 4 eggs. Simple math tells us that our male may sire 120 young for the first brood, and by the end of the summer, up to 240 young. But all is not as it seems. While enjoying the hospitality of the hareem, the female, like her father, is not inclined to remain faithful, often seeking the company of the guy next door. It is estimated that up to half of the young that fledge from a hareem have been fathered by a male that is not the governor of the territory. This is despite the fact that the male makes regular fly-bys over his land, flashing his epaulettes, in full song, to ensure that there can be no mistaking who owns the patch.

The first time I spotted a female of the species I snapped a photograph, and dived into my bird field guides in search of this new species that I had discovered. Was it a sparrow? Maybe a bunting? The female is so different from the male that a novice blackbirder could not hope to make a positive identification. She may be sparrow brown with stripes and flecks, but she is also a beautiful, robust, and feisty lady.

As we might expect, the conservation status of the Red-winged blackbird is listed as Least Concern, but as is so often the case, this status does not tell the complete story. Since 1966 the species has seen a decline in population size by over 30%. It is unclear what it is driving this decline, but I’m certain that the continued loss of wetland habitat, our determination to kill off all insects, and climate uncertainty are playing a role.

In America, over a third of all species recorded on the US Endangered Species list live in wetlands, with half of the same list spending a portion of their life tied to wetlands. The continued loss of this vital habitat will see further decline of the Red-winged blackbird, as well as countless other creatures of land, air and sea.

It was not until I got home and looked through my photographs that I noticed that some of the birds I photographed have rings on their legs. It makes me happy to know that someone if looking out for the future of these beautiful, engaging little birds. If you get a chance, sit and watch a colony of Red-winged blackbirds going about their business on a spring morning. You will never look at them in the same way again.

If you find a banded (wearing a ring) bird, be it a Red-winged blackbird or any other North American species, be sure to report it to the Bird Banding Laboratory