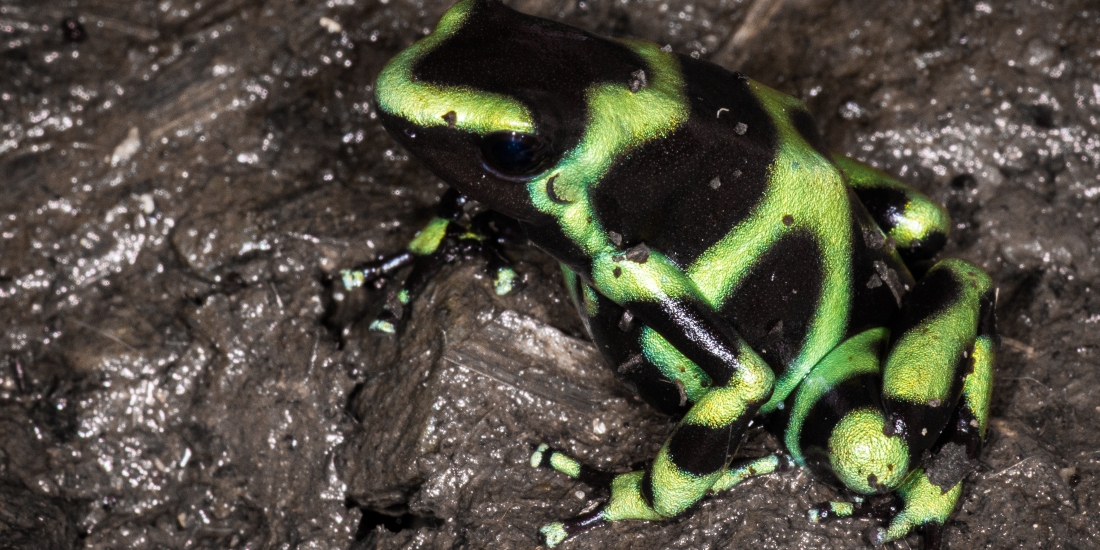 Most kids on my street had pet dogs, cats, rabbits, hamsters and a host of other furry friends. My pets were, with the exception of a guinea pig of two, of an altogether more slippery kind – amphibians. It started with frogs from the local pond, progressed to salamanders and other European amphibians, and eventually, the jewel in the crown, the Green and Black Poison Dart Frog.

These paint explosion of metallic green seemed like one of nature’s most exotic secrets, so the chance of seeing one in the wild rainforests of Central America was almost unimaginable. These tiny gems were top of my wish list when I booked a trip to Panama. I even wrestled for a macro lens for my camera on eBay just in case a little hopper crossed my path.

The first few days of the holiday found us staying on a small island on the Pacific coast of Panama. Isla Muertos has one holiday house on an otherwise uninhabited island. From research I knew there would be poison dart frogs in the area, as well as a host of other wildlife. What I wasn’t prepared for was the number of frogs that lived around the house. My expectation of long, sweaty hikes slashing through vindictive rainforests, lashing at my flesh with thorns, stinging plants and biting insects turned out to be entirely unnecessary. I didn’t need to go to the frogs because the frogs came to me.

The Green and Black poison dart frog, in common with most of the poison dart family, is a small brightly coloured frog. I have read that it grows up to 4 cm (1.57 inches) in length, but I have not seen one, wild or captive, over 3 cm (1.18 inches). This frog is only active during the day time, but has no need for camouflage. Quite the opposite is true, as it sports a striking coat of vibrant, swirling metallic green, which serves as a warning to potential predators. Ignore this warning at your peril, for this is one of the most poisonous creatures on the planet.

Some of the photos that I have published here look like they were taken in an aquarium. You can see smooth wooden planks and a frog against the glass. But these are all wild frogs. Early in the morning, or after one of the daily downpours, a few of the more adventurous frogs would hop up on to the deck to explore. This included an inspection of the windows and doors. Their presence on the raised deck gave me a great chance to climb down to the ground and position myself at eye level with them.

The nightly routine before heading to bed was to take out the trash to the outside garbage bin. I didn’t want the ants to come in for the pineapple peel. One night we had a visitor. No doubt it was one of those masked bandits, raccoons, that pulled over the garbage can, dragged the torn liner and its contents over the yard. At first light my bleary eyed disappointment soon turned to amazement as I realized that the strewn trash was surrounded by a bubbling, bouncing army of frogs. The ants had come and so to had the fruit flies, and where there are ants and fruit flies the frogs will surely follow.

Perhaps this moment did take little of the exotic mysticism away. I anticipated a rare encounter with a timid little emerald, peeping out from the jungle leaf litter. Instead I got a pack of scavengers boldly gathered around a raccoon demolished trash can. This isn’t what you read about in books and it isn’t what David Attenborough shows you on the television.

The frog’s diet is largely made up of tiny jungle ants as well as other pin-head sized invertebrates. The body of these ants contains small amounts of alkaloids. It is these alkaloids that the dart frog converts to the deadly skin secretion that gives it its name. Dart frogs kept in captivity lose their toxicity over time as the aquarium diet of fruit flies and micro-crickets does not provide the raw ingredients required to create their killer soup. 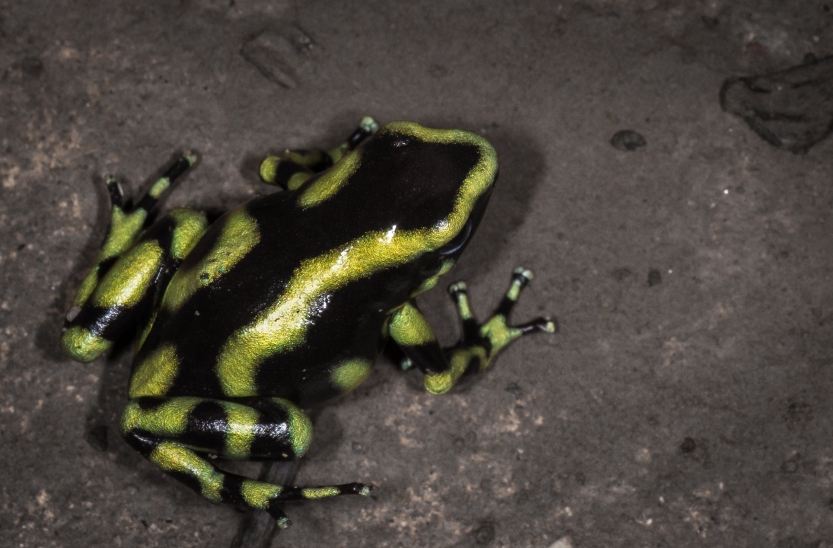 Humans have been tied in a close relationship with this lethal little hopper for many centuries. The tribes of the Central American rainforests collect them to extract the powerful poison from the skin. This poison is smeared onto dart tips and used in blow-pipes to shoot canopy animals during bush meat hunts. The toxic brew is so powerful that a monkey shot with such a dart will fall dead from a tree in moments. The Green and Black dart frog is by no means the most poisonous of the dart frogs, but it is powerful enough to stop your heart from beating in minutes.

The deadly nature of poison dart frog’s skin is generally well known. Perhaps less well known is the research that has been taking place over recent years in to the benefits to humanity that could be hiding in those deadly alkaloids. Pharmaceutical companies are currently studying a painkiller found in the skin of the Green and Black poison dart frog that is 200 times more potent than morphine, with no side effects of addiction.

This frog is not currently listed as endangered, but the devastation that we continue to inflict on the world’s rainforests is well documented. As we lose these treasure troves, we lose the jewels that live within. In our thirst for instant rewards of land and timber we may be destroying the creatures that hold the key to the survival of our species. Painkillers, new antibiotics, maybe a cure for cancer may all be hiding in a tiny, jewel encrusted frog’s back, waiting to be found.

For my part, I’m less concerned with what hides in their remarkable little jackets. It was my privilege was to spend time on the deck of a rainforest cabin, with a smile tattooed across my face, in the company of these bold little jungle gems. This was a bucket-list encounter for me, even as I was picking them out of the garbage. It was in fact, a dream come true!

Join the conversation below. Have you encountered poison dart frogs? What is your dream wildlife encounter?