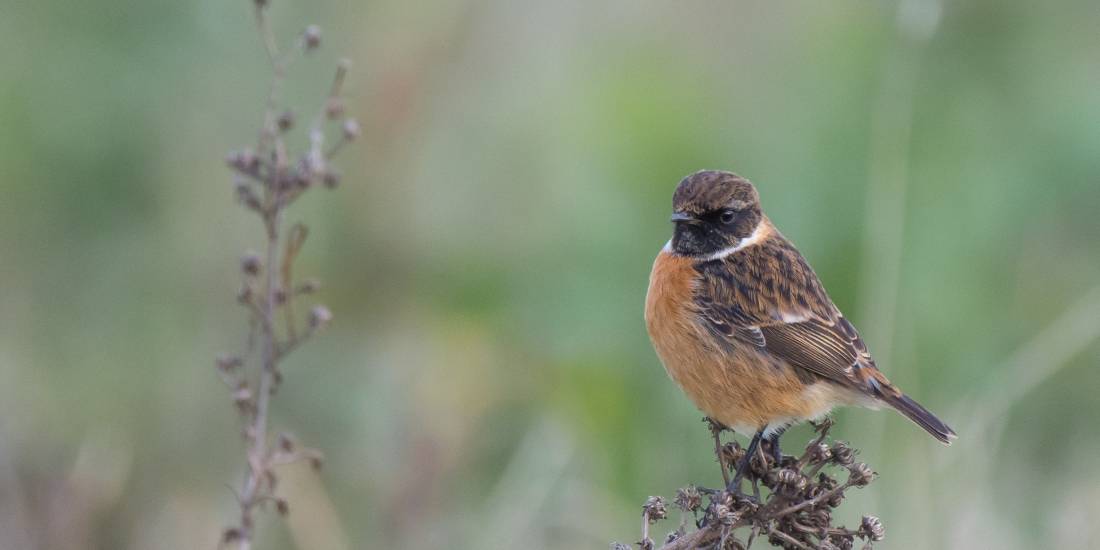 Sunday afternoons were a sad time for me as a kid. It meant the weekend was nearly over and I despised school. It also meant that we would be taking my nan home after she had spent the weekend with us. No fun at all! The great news, though, was that dad would drive us home via The Fort Road. The Fort Road ran alongside an old fort at Tilbury in Essex that dates back to King Henry VIII, who created the original structure to defend against French invaders. The fort was given a 1588 upgrade when it was visited by Queen Elizabeth I where she addressed the troops in their successful endeavours to repel the Spanish Armada. The land surrounding Tilbury fort was open and unkempt common land, scribbled with drainage ditches. It was a chance to see wildlife. Winter afternoons were particularly exciting, because every few years we would see the jewel in the crown – a Kingfisher. But one rare day the call went up from my dad “Stonechat!” 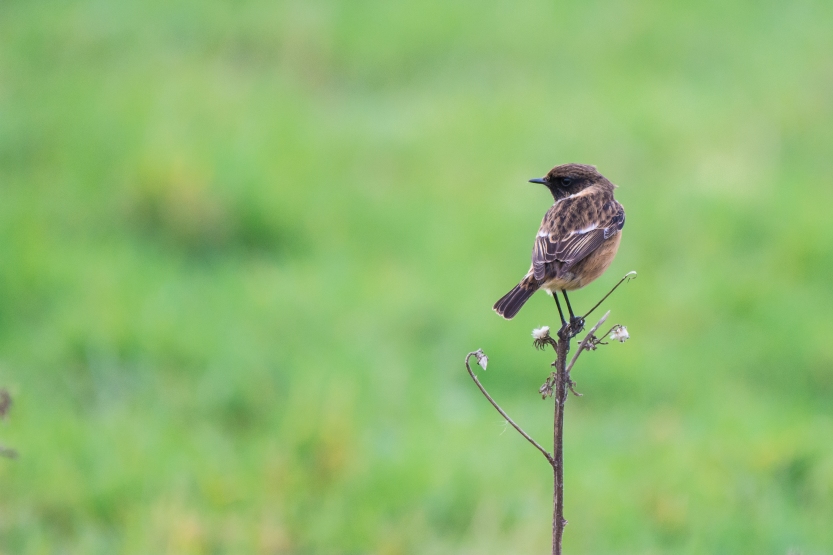 At that time the Stonechat was an uncommon bird and certainly not a bird that we would see in Essex. We had to travel for a few hours South West to have a chance of seeing them on the moors and heaths of the English coast. The wasteland that borders the mud-oozing Thames was not Stonechat habitat.

Fast forward to today. A concerted effort has been made to establish a corridor of nature parks that track the north bank of the Thames to the Estuary. One of these parks is Thameside Nature Park at Mucking. When I was a kid this 120 acre site was a huge landfill that insatiably swallowed the foul smelling trash excreted by London’s sprawl. Covered over and allowed to be reclaimed by nature, the site at Mucking is now home to many species of birds, mammals, reptiles and insects.

One of the birds that has taken advantage of the nature corridor is the Stonechat. Every time I visit the Mucking site I see them. That classic Stonechat sight of a small bird perched on the tallest plant in open scrubland. This is a well dressed bird that knows that it would not be appropriate to hide its beauty in the undergrowth. Better to perch high and sway in the river breeze where everyone can see you. 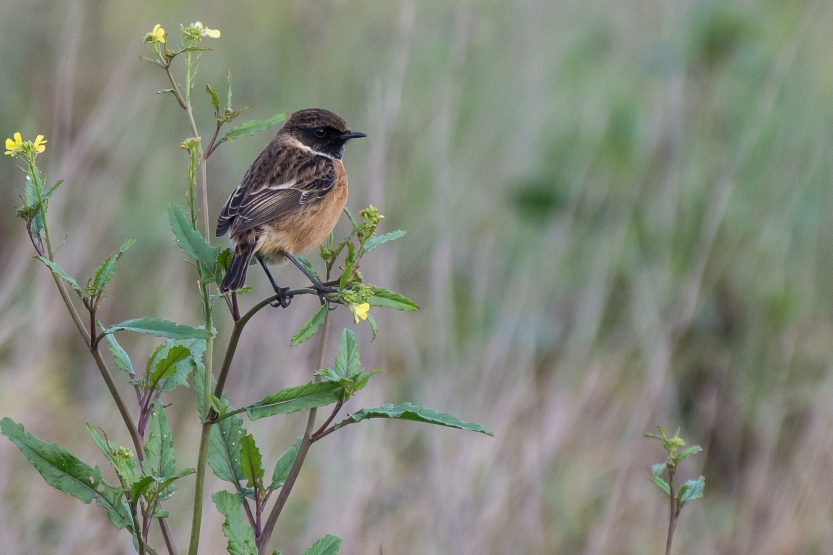 The Stonechat is a small, smart looking bird, with short wings and a compact tail. It is ever so slightly smaller than the more famous UK red-breasted bird, the European robin. It would be easy to imagine the two species as related, but the Stonechat is more closely related to the flycatchers.

The spread of the Stonechat has outpaced the field guides and even the RSPB website, all of which fail to identify Stonechat distribution as a year-round resident along the Thames corridor. 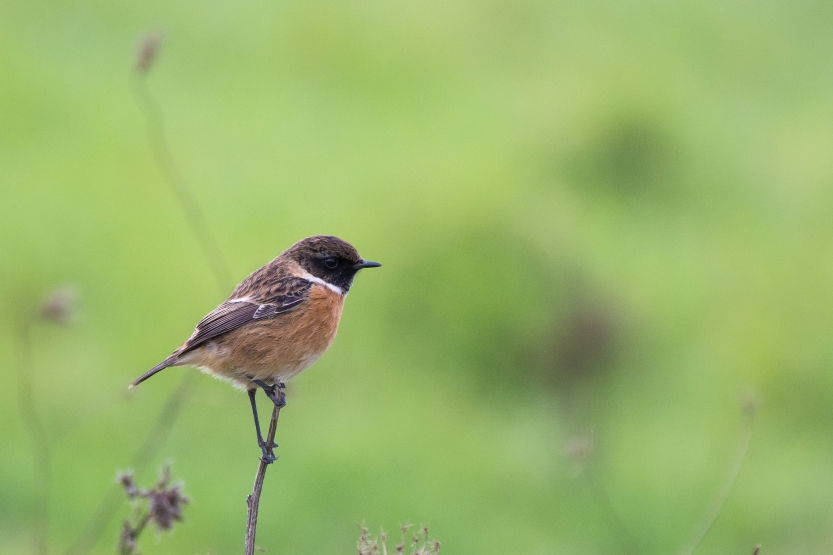 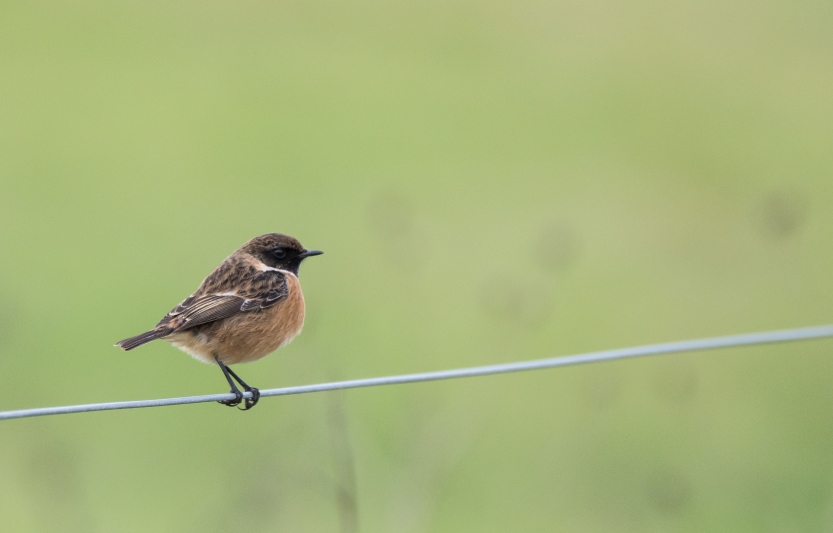 On a recent visit home I stumbled upon another local colony of Stonechats; this time they were at Coalhouse Fort. Another old fort that is situated between Tilbury and Mucking. By following social media posts it is clear that these birds are being seen on every area of open and unmanaged grassland from East London to Shoeburyness, where the Thames spills out into the English Channel.

The land surrounding Tilbury Fort is becoming more closed-in as the port of Tilbury expands it’s warehousing. The drive along the Fort Road is not what is used to be. But this is one of the rare occasions when the loss of a habitat has been compensated by the creation of more and better habitat for Stonechats. Now the roles are reversed in my family as it is me that drives my mum and dad to Mucking but today we are almost guaranteed to see Stonechats, and even better, we can do so while devouring a piece of cake in the Nature Center. What better way to celebrate the rise of the beautiful Stonechat in Essex.

Join the conversation below. Where are you seeing Stonechats? Have you noticed and increase or decline in your area? What are your memories of the forts of Tilbury and East Tilbury? 👇👇👇