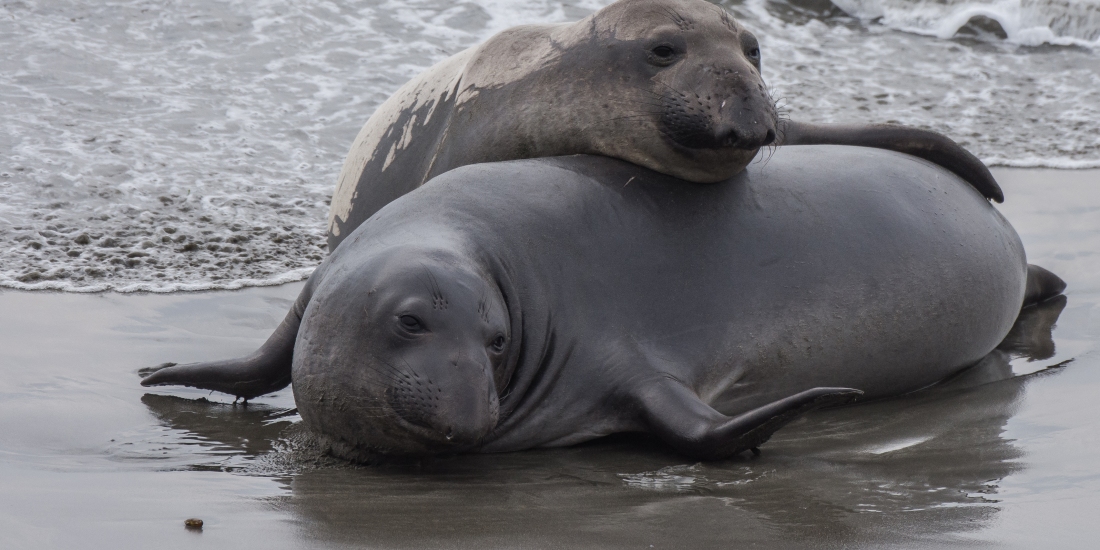 I was traveling north on Highway One; a highway carved between crumbling rocks, towering Redwoods and the rich blue waters of the Pacific Ocean. Highway One is also carved into literature by some of the greatest American writers. Kerouac, Miller and Steinbeck have all found inspiration on this iconic route. I was also here to be inspired, but my inspiration would come from a different place than that of the great novelists.

I set off from Redondo Beach in the morning, passing through Santa Barbara on the way to San Simeone, where I would spend the night. I arrived shortly after dark with a sense of excitement. At last I was within striking distance of California’s Northern Elephant seals.  It was the Thanksgiving holiday; Not the best time for seal viewing, but a time of year when young animals start to haul up on the beaches. In the past I had made several visits to the area at the wrong time of year, at least this time I had a chance. The following day would surely start with Elephant seals!

An American kestrel pointed the way to the seal viewing spot at Piedras Blancas. I was churning with excitement as I pulled into the car park. There were a few people there, but it wasn’t crowded. I could see that someone was pointing at a seal, so I tumbled out of the car and grappled for my camera. I didn’t want to miss my opportunity so I trotted to the edge of the beach. I need not have worried; the blubber boulders were everywhere and they were not going anywhere fast.

They were smelly, they were grumpy, they were snotty nosed and noisy, but they were inexplicably charming. I focused on a young animal that was smiling through a magical dream. The heaving heaps of bodies do not stay calm for long, though. One animal shifted position and in doing so accidentally nudges its neighbour, triggering a snarling, gurgling argument.

We walked along the path where one particularly fat seal was lying on the sand. He was eyeing a patch of sand about 25 meters away, where a couple of smaller seals were sleeping. With the effort of a person shakily completing a hundredth push-up, the barrel of blubber hauled himself in to somewhat of an upright position. He gasped and grunted as, with fat rippling, he dragged himself across the sand, a few exhausting meters at a time. We named him Grunty.

The seals of Piedras Blancas are Northern Elephant Seals. These prodigious pinnipeds are some the largest seals in the world, second only in size to their Southern cousins. Adult males grow to an immense 5 meters (16 feet) in length and can weigh in at a whopping 2,300 kg (5000 pounds). Females grow to around a meter shorter than the male and don’t generally exceed 800 kg (1800 pound).

The survival of the mighty beasts and the existence of the California colonies are a conservation triumph. The huge sacks of blubber lying on the western beaches were too much of a temptation for humans. When rendered down to oil, the blubber kept the lamps of America burning, and was a lot easier to acquire than that of the mighty whales of the Pacific. The population dropped down to one colony of about 50 animals. Now, thanks to conservation efforts that began in Mexico, the population has grown to around a quarter of a million animals.

I left Grunty enjoying a well earned rest after his 10 minute 10 meter sprint, and I walked to the opposite end of the beach. This part of the beach was less peaceful. The seals on the beach at this time of year are mostly young animals or adolescent males. The massive mature males arrive a few weeks later. The adolescent males use this time to pretend that they are battling for the grand title of Beach Master. Elephant seals take their name from the huge nose that develops as they reach maturity. The nose has been known to grow up to 60 cm (2 feet) in length! These long-nosed lard barrels will dominate the beach. The seals that were lumbering into their hopeful battles of the beach were just beginning to show signs of nose growth. Two fat boys began a noisy wrestling match at the water’s edge, while smaller animals watched and learned from a safe distance.

The seals reared up high and try to assert dominance over each other by pushing their opponent down to the ground. The battle is fought in short bursts, as lifting this much weight on land soon exhausts even the strongest animals.

The rules of engagement seem a little questionable. The wrestling match soon descends into a brawl, where anything goes. A swift, grimace inducing, bite to the neck looks like the winning move, but the battle swings again.

The exhausted seals belly flop down to the sand and despite the bite on the neck the grimacing giant ends the bout on top. Just in case his adoring fans hadn’t noticed he reared up one last time to bellow his victory cry, before slumping on to the wet sand with a self-satisfied smirk. 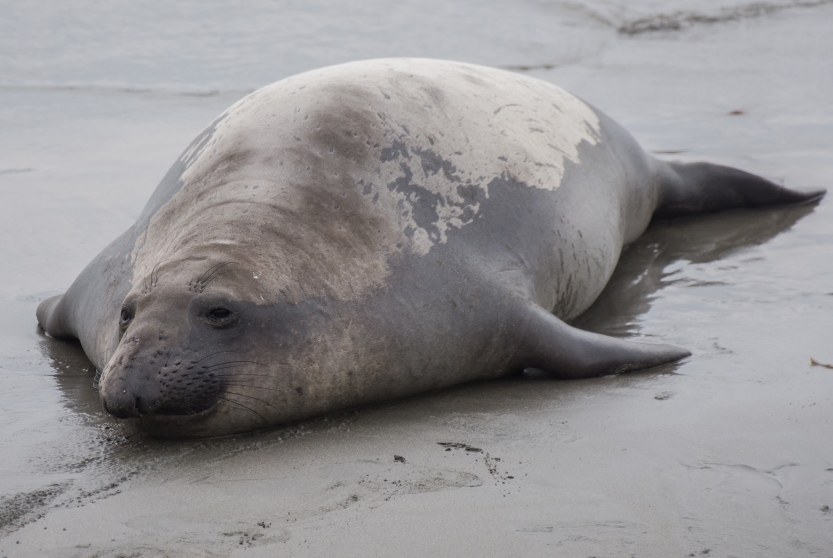 I walked back towards the car and noticed a huge male with a larger nose than the others, snottily snoring on the warm dry sand. I guessed that it would be a matter of time before he stirred from his slumber to regain his position as the boss. At least for a few days until the first of the mature males arrive.

I am grateful for the chance to see these mighty creatures that are given the chance to thrive on some of the prime beaches of the California coastline. My bucket list encounter is only partially checked-off, as I must get back one February to watch the giant males battling alongside tiny newborn pups. The drama of the fight back from extinction, battles for beach dominion, and the birth of new life on California’s coast is drama to rival anything put on paper by Karouac, Miller or Steinbeck.

For more information or to plan your own visit follow the link to Friends of the Elephant Seals website. The non-profit organisation do incredible work and have some fantastic resources.

Join the conversation below. Have you seen Elephant seals along the California coastline? 👇👇👇

It takes a lot of work to produce a blog so I really appreciate people sharing my posts on social media.