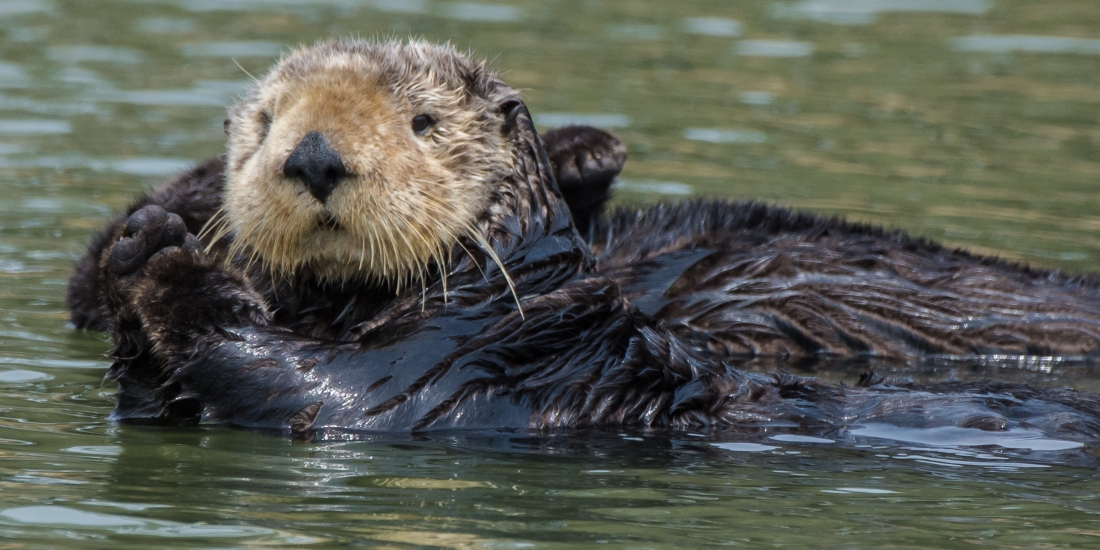 It was daybreak on a chilly morning in Northern California. The rising sun was painting her first golden strokes across the river mouth at Elkhorn Slough. I could feel the gull poop squelching into the seat of my jeans from the cold damp granite rocks of the breakwater.

I was here for the whale watching, but while I slurped back my morning coffee, I thought I would try out my new camera lens before boarding the boat. A Sea otter corked to the surface with an arm full of mussels and crunched its way through breakfast. I took a few shots and checked the results. Yes, I was very happy with the lens, but even happier to feel the chilled wind on my face, with the scent of the ocean swirling around my head in a gentle warming sunbeam. What a perfect start to a day! 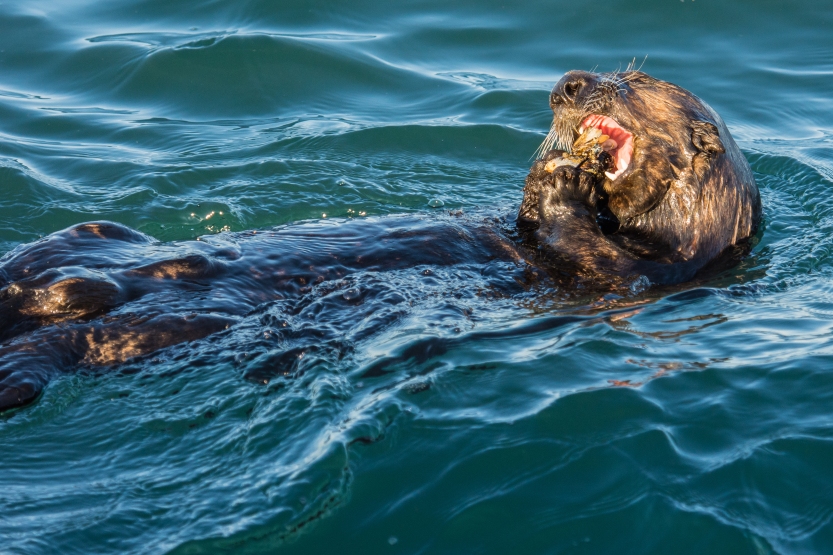 If you dream of seeing a Sea otter in the wild, the best place on the planet to go is Monterey Bay, California. More precisely, go to a little harbor at the centre of the bay called Moss Landing.

I have enjoyed the company of Monterey Bay’s Sea otters an many occasions. The drive from San Francisco International Airport can be as quick as 1 hr 40 minutes, or in Friday traffic, closer to 3 hours. I take the coast road. As day fades in to night, the exquisite Cabrillo Highway is set ablaze by the Pacific sun. The ocean mist lifts up thirsty sand particles, creating amber clouds that drift low over the Highway. 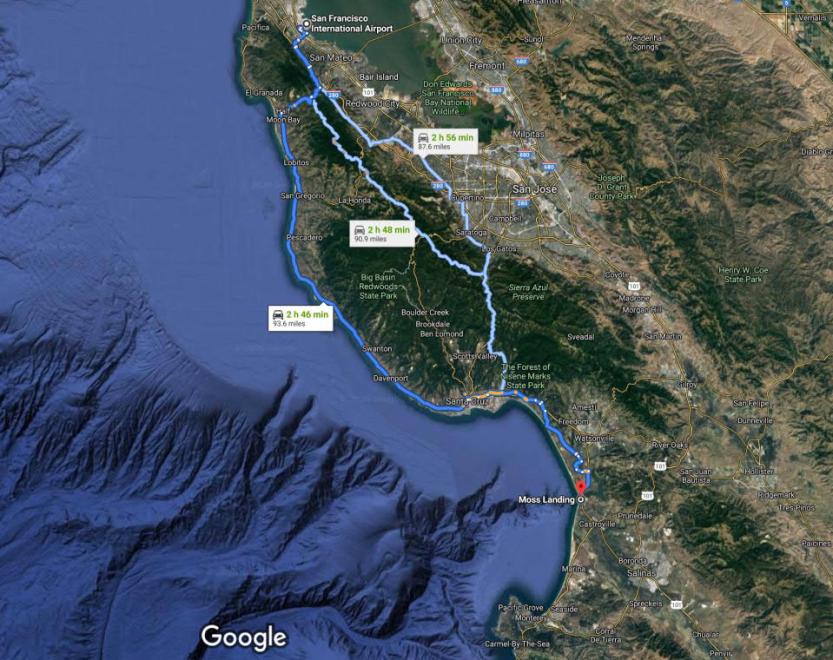 Moss Landing is not a picturesque hive of activity, like the harbor towns that bookend the Bay; Monterey City and Santa Cruz. It is a working harbor with boat yards and small businesses. Food options are limited and the local morning coffee is teeth clenchingly bad. I’m not sure what would bring tourists here if it wasn’t for the wildlife. But it does have wildlife, and what wildlife it has!

Every time I visit Monterey Bay I spend some time with the Moss Landing otters. I have my ottery hotspots that never let me down. The unpredictable weather of the Bay has let me down, as a photographer. Thick cloud, rain, mizzle and fog have all conspired against me, but the otters are ever-present, come rain wind or shine.

My first hotspot comes up just off the Cabrillo Highway, on Moss Landing Road. I look to the right as I cross the first road bridge. The water is a shallow mud soup at the end of the boat docks. I don’t always see otters here, but when I do they are unbelievably close to the road.

At first light I turned on to Moss Landing Road and stretched my neck towards my otter spot. There was a large furry blob floating on the water, so I pulled the car to the edge of the road. I grabbed the camera, climbed out the car and sat by the water. I had been blessed; there was a mother and baby Sea otter floating about 10 feet in front of me.

I snapped a few quick shots and then a few more, but I had time and so it seemed did the otters. They were dozing when I arrived and remained undisturbed by my presence, or that of the bulky California sea lion that was destroying a boat dock near by.

The gently moving water eased mum and baby apart. They drifted a couple of feet away from each other and soon woke up. Mum used the opportunity to have her morning bath. She rubbed her face with her front paws and did several full body rolls. She cleaned her chest and washed her tail and rolled again.

Baby was a little bigger than I had expected, but young otters stay with mum for around 8 months. During this time mum will teach the pup how to swim, what to eat and how to hunt. By this age floating and sleeping comes naturally.

The little guy kept a watchful eye on mum and as soon as bath time was over the two otters settled back down to sleep. With an almost imperceptible waft of their tails the two fur balls came together again, their heads sticking like magnets and the full body length soon following.

I stayed with them for a while, but Sea otters can sleep for a long time, so I decided to move on and check the mouth of the harbor before boarding the whale watching boat. The pile of rocks that form the wall of the harbor mouth is the spot that I am certain to see otters. Following a bit of a scramble over the granite, I can always find a flat rock to sit on and take shots of otters feeding on mussels and aquatic worms.

The Sea otter is surprisingly large when compared to its smaller cousin, the River otter. At a glance it is easy to confuse a large Sea otter with a young Harbor seal. The male Sea otter grows larger than the female, with California specimens weighing in at up to a whopping 70 pounds (32 Kg) and reaching 4 feet (1.2 meters) in length. 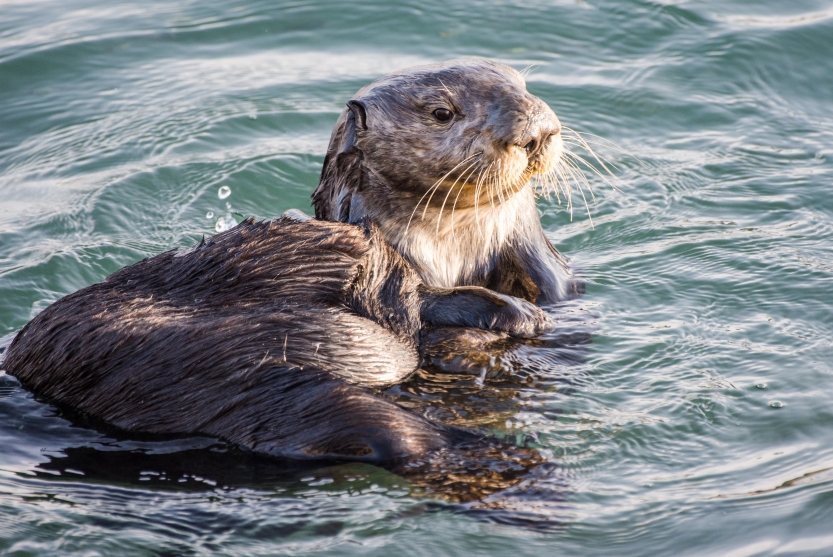 The plunging Monterey Canyon, an underwater valley that is deeper than the Grand Canyon, is the engine that drives the nutrient rich waters of the Bay. The upswell of cold waters bring a stew of krill and anchovies that in turn bring in sharks, whales and other marine mammals. The nutrients also feed the enormous number of mollusks and crustaceans that support the growing otter population.

It seems that every inch of shoreline presents a buffet for otters. I have watched diving otters devouring huge aquatic worms, mussels by the arm full, purple urchins, crabs, snails and clams.

I moved to another hotspot just off of the Cabrillo Highway; a small elevated footpath that runs behind the Pacific House Seafood restaurant. The food served in the restaurant isn’t great, but the waters at the mouth of Elkhorn Slough below it provide a seafood medley for otters.

I stood on the path and looked down at an otter diving for snacks.  The otter popped up with a clam that was swiftly devoured. Another dive and another clam was smashed and gulped down. Then things got a bit more exciting. The otter dove into the sea grass and this time popped up in a life or death battle with an angry looking crab.

After a brief struggle the otter quickly dispatched the claws. The fight was over and all that was left for the crab to do was to sit and be crunched. I could hear every shell breaking bite and the crackle of legs being twisted off.

The crab was harder work than the defenseless clams, but the otter appeared to be thrilled with itself, so I guess that crab is a tasty delicacy. As the otter munched, crunched and sucked on lunch, a gull belly-flopped on a baby octopus, plucking it from the water beside the otter. The richness of these waters never ceases to amaze.

The gull wasn’t the only creature that noticed that my otter had secured a prime spot. Another otter slipped through the water, surfacing alongside my otter and a little squabble broke out. I saw flashing teeth and snarling noses in the swirl of water and fur, but it wasn’t clear if the otters were really committed to the fight or were enjoying a little rough and tumble.

Finally both otters rolled underwater together and after a couple of minutes both surfaced with a clam. Peace breaks out easily when tummies are full.

After I had taken my fill of photographs, I pulled out my phone to take a couple of short videos. The first video showed the otters’ unique clam opening behaviour. The Sea otter is one of the few animals on the planet that are known to use tools. The otter surfaced with a clam and a flat rock that it positioned on its chest. The otter bashed the clam on to the rock, cracking it open to expose the sweet meat inside.

My next video captured the otter washing itself post-feed, before rolling back under the water. You can see pieces of clam sinking as the otter washed itself. The otter’s fur is the secret to its success so it needs to keep it in tip-top condition. With up to a million hairs on a square inch of otter, the fur is the densest in the world and the key to the otters buoyancy and warmth.

This same luxurious fur made the otters the prime target species for fur hunters of the 1800s. As a result, the Southern Sea otter was hunted to extinction, or so it was thought. But a few survived. The approximately 3,500 individuals that now live along the North California coast between Half Moon Bay and Santa Barbara descend from 50 animals that were discovered living below the protecting cliffs of Big Sur.

In modern times, the Monterey Bay Aquarium has been at the forefront of otter conservation with its world famous Sea otter rescue and release program. Over the past 30 years over 700 otters have been rehabilitated and released. Many of these animals are released into the calm water of Elkhorn Slough. This must surely have contributed to the Moss Landing population’s willingness to be in such close proximity to humans.

Moss Landing is the best place to see Sea otters, but they can also be seen in and around the habor at Monterey. Generally not as many and not as close, but they are there.

During the last whale watching trip that I took out of Monterey’s Fisherman’s Wharf I had the treat of an encounter with a mum and pup otter within the harbor wall. The boat slowed and stopped and mum hugged her little pup tightly, resting its head on her chest. I took some shots and then looked at the 40 something passengers on the boat. Every single person had a huge smile tattooed across their face. There is something about these little creatures that is just good for the soul.

At the end of the weekend I reluctantly climbed in the car for the drive back to San Francisco airport. I left early enough to get beyond Santa Cruz in time for Sunset. This stretch of road becomes an inspiration and a mental tonic.

I pulled over and reflected on my blessings. I had spent two days immersed in wildlife and the Sea otters had filled my heart and my SD card with their sparkling personalities.

The sunset stained sky set the ocean spray on fire. The salty flames lashed at a squadron of pelicans before crashing over the amber sands. It was a breathtaking end to another exhilarating weekend on California’s Pacific Coast.

I always stay in Monterey. There aren’t many accommodation options in Moss Landing and I’ve found better value in Monterey. I’ve not tried Santa Cruz, but I’m sure there are great options.

Join the conversation below. Have you seen wild Sea otters? Where did you see them? 👇👇